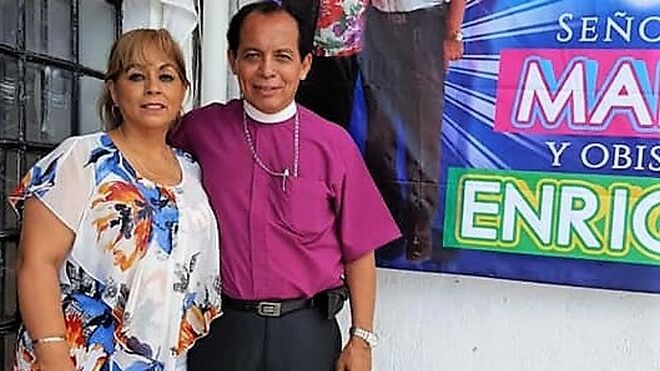 The Provincial Synod of the Anglican Church of Mexico (Iglesia Anglicana de Mexico) has installed a new primate. At their Tenth synod last week they also referred debate on whether the church may bless same-sex marriages to a commssion for review.

On 11 June 2022 the Rt. Rev. Enrique Treviño Cruz, Bishop of Cuernavaca, was installed for six year, renewable, term of office as primate. Bishop Treviño was elected in 2020 by the Mexican House of Bishops, but due to COVID was not seated as archbishop until this month’s meeting of synod.

Enrique Treviño Cruz was born in Poza Rica, Veracruz, in 1959 and was elected by the synod to be bishop of the Diocese of Cuernavaca in November 2012. He is married to María Eugenia Salgado and they have three adult children. He was educated at St Andrew’s Theological Seminary in Mexico City and has a bachelor’s degree in education and a master’s degree in science.

He succeeds the Most Rev. Francisco Moreno, Bishop of Northern Mexico, who retired in November 2020 upon reaching the mandatory retirement age of 70.  Bishop Treviño has served as acting primate since the retirement of Archbishop Moreno. The new primate is expected to continue his predecessor’s moderate stance on same-sex marriage – maintaining relations with those Anglican provinces that permit same-sex marriage, while opposing any changes for the Mexican church.

In February 2022, by a two-thirds majority, the diocesan synod of the Anglican Diocese of the Southeast approved a resolution asking the national church to revise the Book of Common Prayer’s Marriage liturgy, changing the phrase “man and woman” to mean “between two persons”. The Southeast resolution also asked the church to allow the blessings of parterships – whether same-sex or opposite sex, and to permit the blessings of same-sex marriages.

The synod voted to refer the resolution to a study committee for review. The Bishop of Southeast Mexico, the Rt. Rev. Cesar Martin, responded with a statement on Facebook announcing his diocese’s plans for the future. He wrote:

Given the fact that in our National Synod was not submitted to a vote (but turned to a canon commission for review) the motion that led the Diocese of Southeast to modify the law of marriage, so that in this way they would have access to this couples of the same gender, I make the following STATEMENT:

I, Julius Cesar Martin, Diocesan Bishop of the Anglican Diocese of Southeast, will continue to fight from my ministry for the dignity and equality before God of every human being.

I will continue to receive seminarians, aspirants and candidates for sacred orders without asking, assuming, or addressing issues about their sexual orientation.

I will continue to ordain deacons and presbyters and participate in the ordination of bishops without asking, assuming or attending issues about their sexual orientation.

I will continue to encourage my congregations to receive and respect LGBT+ people equally.

I will continue to bless individuals and their families without asking, assuming or attending issues regarding their sexual orientation.

I will continue to remind the people that marriage is a sacrament between the contractors and that the clergy only solemnizes it and that, therefore, there are before God many real and true marriages of people who love each other deeply and commit you in body and soul even when they have not been able to be solemnized.

I will continue to march, alone or accompanied, for those who share my stance for the recognition of the equality and dignity of the brothers of sexual diversity and for their access to all the civil rights that as humans entitle them inc fighting for the right to marriage.

I will continue to support from my capacity actions within the Church aimed at the recognition of the dignity and equality before God of every human being, including LGBT+ persons.

And under my diocese anyone is free to do these things, in accordance with their role as a clergy or layman in my jurisdiction, without fear of negative repercussions.

Praying for the canon commission that will work on this motion to be presented at the next Provincial Synod in 2025.