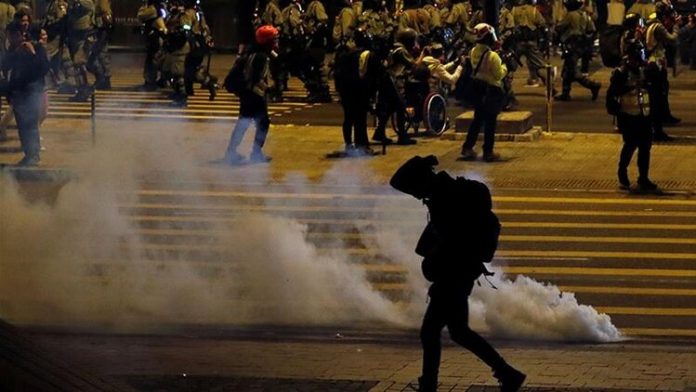 Widespread reports of beatings, firing rubber bullets at people’s heads and faces (in clear breach of international norms), indiscriminate use of teargas and water cannon against largely peaceful crowds celebrating Christmas in Tsim Sha Tsui and other areas represent yet another example of the escalating human rights crisis in Hong Kong.

In horrific scenes, a protester chased by police fell from one level of a shopping mall to another and sustained very serious injuries while another fell from a rooftop after police shot at him multiple times as he clung to the edge.

“Hong Kong witnessed truly outrageous police brutality on Christmas Eve. Are Hong Kongers now not even allowed to gather to celebrate Christmas peacefully, to shop and sing carols? The level of violence in Hong Kong has reached such severe and sustained levels that an international, independent inquiry should be urgently established.”

“We also call on the United Kingdom to lead the international community by establishing an international contact group of like-minded nations to co-ordinate a global policy response to the crisis.

“Furthermore, we urge the British Prime Minister to speak out clearly and urgently, and we call on the British government and others to introduce targeted Magnitsky sanctions against those responsible in Hong Kong and China for severe human rights violations, including officials in the government and the police.

“It is time for immediate international action to stop the crisis in Hong Kong escalating still further, to end impunity and to move towards peace and the re-establishment of Hong Kong’s freedoms and autonomy.”