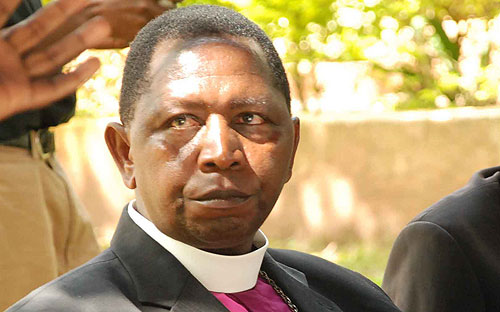 The Archbishop of Uganda has welcomed the Archbishops of Canterbury and York’s letter to the primates about the communion’s agreed statements on the pastoral care of homosexuals. However Archbishop Stanley Ntagali asks whether the English archbishops are also ready to act upon the entire statement and ban American and Canadian bishops from the next Lambeth Conference.

Archbishop Stanley Ntagali Comments on Uganda’s Anti-Homosexuality Bill, the Church of England’s “Pilling Report,” and the Open Letter from the Archbishops of Canterbury and York

The Church of Uganda is encouraged by the work of Uganda’s Parliament in amending the Anti-Homosexuality Bill to remove the death penalty, to reduce sentencing guidelines through a principle of proportionality, and to remove the clause on reporting homosexual behaviour, as we had recommended in our 2010 position statement on the Bill. This frees our clergy and church leaders to fulfill the 2008 resolution of our House of Bishops to “offer counseling, healing and prayer for people with homosexual disorientation, especially in our schools and other institutions of learning. The Church is a safe place for individuals, who are confused about their sexuality or struggling with sexual brokenness, to seek help and healing.”

Accordingly, we are grateful for the reminder of the Archbishops of Canterbury and York to fulfill such commitments as stated in the 2005 Communique of the Primates Meeting held in Dromantine, Northern Ireland.

We would further like to remind them, as they lead their own church through the “facilitated conversations” recommended by the Pilling Report, that the teaching of the Anglican Communion from the 1998 Lambeth Conference, from Resolution 1.10, still stands. It states that “homosexual practice is incompatible with Scripture,” and the conference “cannot advise the legitimising or blessing of same sex unions nor ordaining those involved in same gender unions.”

Furthermore, as our new Archbishop of Canterbury looks toward future Primates Meetings and a possible 2018 Lambeth Conference of Bishops, we would also like to remind him of the 2007 Primates Communique from Dar es Salaam, which says that there are “consequences for the full participation of the Church in the life of the Communion” for TEC and those Provinces which cannot

“Make an unequivocal common covenant that the Bishops will not authorize any Rite of Blessing for same-sex unions in their dioceses or through” their governing body;

“Confirm…that a candidate for episcopal orders living in a same-sex union shall not receive the necessary consent.”

It is clear that the Episcopal Church in the USA and the Anglican Church of Canada have not upheld these commitments, and so we do pray for the Archbishop of Canterbury as he considers whether or not to extend invitations to their Primates for the next Primates Meeting or to their Bishops for the 2018 Lambeth Conference. To withhold these invitations would be a clear signal of his intention to lead and uphold the fullness of the 1998 Lambeth Resolution 1.10.

The Most Rev. Stanley Ntagali

ARCHBISHOP OF CHURCH OF UGANDA.