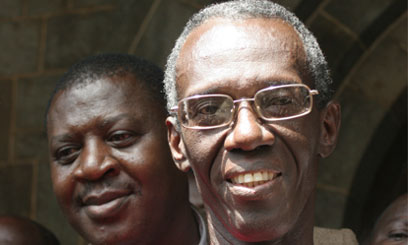 “The good advice of the Archbishops of Canterbury and York would carry much more weight if they were able to affirm that they hold, personally, as well as in virtue of their office, to the collegial mind of the Anglican Communion. At the moment I fear that we cannot be sure.” Archbishop Eliud Wabukala

This week, the Archbishops of Canterbury and York sought to remind the leadership of the Anglican Communion and the Presidents of Nigeria and Uganda of the importance of friendship and care for homosexual people.

Christians should always show particular care for those who are vulnerable, but this cannot be separated from the whole fabric of biblical moral teaching in which the nature of marriage and family occupy a central place.

The Dromantine Communiqué from which the Archbishops quote also affirmed (Clause 17) the 1998 Lambeth Conference Resolution 1.10 which states that ‘homosexual practice is incompatible with Scripture’ and that the conference ‘cannot advise the legitimising or blessing of same sex unions nor ordaining those involved in same gender unions’.

Yet earlier this week, the English College of Bishops accepted the recommendation of the Pilling Report for two years of ‘facilitated conversation’ because at least some of the bishops could not accept the historic teaching of the Church as reaffirmed in the Lambeth resolution.

Indeed, in making the case for such a debate, the Pilling Report observes ‘In the House of Lords debate on same sex marriage, the Archbishop of York commended that the Church needed to think about the anomalies in a situation where it is willing to bless a tree or a sheep, but not a faithful human relationship.’  The anomaly only exists of course if it really is the case that a committed homosexual union can also be Christian.

The good advice of the Archbishops of Canterbury and York would carry much more weight if they were able to affirm that they hold, personally, as well as in virtue of their office, to the collegial mind of the Anglican Communion. At the moment I fear that we cannot be sure.

Regrettably, their intervention has served to encourage those who want to normalize homosexual lifestyles in Africa and has fuelled prejudice against African Anglicans. We are committed to biblical sexual morality and to biblical pastoral care, so we wholeheartedly stand by the assurance given in the 1998 Lambeth Conference resolution that those who experience same sex attraction are ‘loved by God and that all baptised, believing and faithful persons, regardless of sexual orientation, are full members of the Body of Christ.’