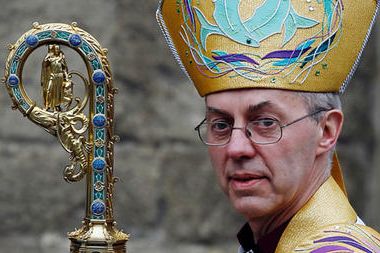 The Archbishop of Canterbury Justin Welby arrived in Juba, South Sudan this morning, saying he brought with him ‘the greetings, love and encouragement’ of his fellow Anglicans to those suffering amid the on-going conflict in the country.

Praising the South Sudanese Church as ‘an example to us all’ in its consistent and unified calls for peace and an end to violence, Archbishop Justin said he joined its leaders in urging political differences to be set aside for the ‘urgent task’ of bringing healing and reconciliation.

Archbishop Justin, accompanied by his wife, Caroline, today starts a five-day visit to South Sudan, Burundi, Rwanda and the Democratic Republic of Congo to meet with fellow Primates of the Anglican Communion

The visit is part of Archbishop Justin’s plan to visit all of his fellow Archbishops around the Anglican Communion during his first 18 months in office. His desire is to express solidarity, build personal and professional bonds, understand the Primates’ work in their local contexts, and lay foundations for good collaboration over the coming years.

Arriving in the capital Juba, Archbishop Justin said: “All our prayers are with the people of South Sudan at this testing time for the young nation. I have come with my wife, Caroline, and my colleague Joanna Udal who has long experience here, bringing the greetings, love and encouragement of your brothers and sisters in Christ around the world.

“The South Sudanese Church is an example to us all in its consistent speaking with one voice for peace, for unity and to an ending to the violence so horrifically perpetrated against so many people. With the South Sudanese Church leaders, I urge political differences to be set aside for the sake of the urgent task of bringing healing and reconciliation.”