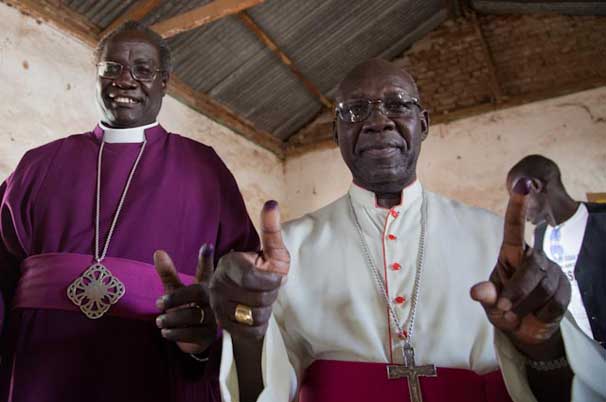 Church leaders in South Sudan have warned the political fighting between supporters of President Salva Kiir and former Vice President Riek Machar could spark a tribal war between the Dinka and the Nuer — ripping apart the new nation of South Sudan.

Juba — So the king said, ‘Bring me a sword’, and they brought a sword before the king. The king said, ‘Divide the living boy in two; then give half to one, and half to the other.’ But the woman whose son was alive said to the king—because compassion for her son burned within her—‘Please, my lord, give her the living boy; certainly do not kill him!’ The other said, ‘It shall be neither mine nor yours; divide it.’Then the king responded: ‘Give the first woman the living boy; do not kill him.

She is his mother.’All Israel heard of the judgement that the king had rendered; and they stood in awe of the king, because they perceived that the wisdom of God was in him, to execute justice. (1 Kings 3:24-28)

Whatever has happened in Juba over the last few days, we are concerned about the consequences.

There is a political problem between leaders within the SPLM. This should not be turned into an ethnic problem. Sadly, on the ground it is developing into tribalism. This must be defused urgently before it spreads.

Reconciliation is needed between the political leaders. Violence is not an acceptable way of resolving disputes. This must be done in a peaceful and civilised manner. Reconciliation is at the heart of the Church’s ministry, a key Gospel value, and so we offer ourselves as mediators.

The way this incident is handled will have an effect on the future of our nation, whether positive or negative, both internally and in terms of international relations.

We are concerned about ongoing insecurity. Today was supposed to be a normal business day, but that was not the case. Fighting, killing and looting continued. The army must be controlled. We appeal to the security forces, who are our brothers, our sons and our parishioners, to exercise restraint and responsibility and to respect civilians.

We urge the civilians to remain calm and to stay somewhere safe. The government should give information to civilians when there are security operations and direct them where to go for safety.

We wish to see assurances for the safety of our international friends, including those from neighbouring countries, who are here to help us.

We urge the government, UN and NGOs to provide humanitarian assistance to the displaced civilians in Juba, and to ensure that water and food are available for the population.

We are in the season leading up to Christmas. This year’s Christmas may not be what we expected, but it is what we have been given and we must accept it as it is. As we celebrate the birth of the Christ-child, let us remember that God is with us, and pray for the strength and courage to bring peace, reconciliation and healing to our new nation.

Text of message given to TV and radio media on 17th December 2013 by Archbishop Paulino Lukudu Loro on behalf of the following Church leaders: