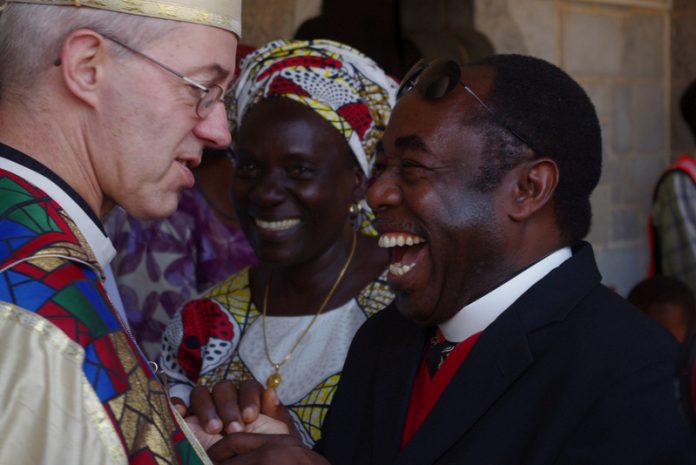 Delegates to the 2ND Global Anglican Future Conference, meeting in Nairobi from 21-26 October 2013, have settled down to a daily round of worship, workshops and presentations.  The program has been decidedly apolitical – in Anglican terms – with only occasional glimpses of the divisions in doctrine and discipline besetting the communion.

The theme of the conference was set on the opening day by an address by Gafcon general secretary Peter Jensen and a series of presentations on the East African Revival – interspersed with worship and hymn signing.

On the second day the chairman of the Gafcon primates’ council and host for the conference, Archbishop Eliud Wabukala gave his presidential address followed by a plenary address by Dr. Mike Ovey, principal of Oak Hill Theological College in London.

A series of shorter presentations followed on the topics of the “suffering” and the “lonely” church.

Archbishop Daniel Deng Bul of the Sudan spoke of the situation facing Christians in North and South Sudan. But noted “suffering makes you stronger than before.”

“In 1955 there were less than a million Anglicans, during the war it grew to 4 million,” he said. “Jesus is accompanying us!”

The ways of God were mysterious, he said. “Sometime God wants you to lose your own life. Our people lost everything, but they had hope in Jesus. Jesus answered our hope with our own country.”

The archbishop commended Gafcon saying “I am glad that Jesus is with us. There will be renewal. You are praying with us. We are not alone.”

Bishop Ben Kwashi of Jos, Nigeria recounted the troubles facing Nigeria. His diocese was afflicted by poverty, drought and depredations of the Islamist terror group, Boko Haram. Yet in the midst of economic deprivation and persecution “evangelism among Muslims is possible” and “it is welcome,” he said.

“If you do your ministry as you should, these same people of all religions come to Christ,” he said. Anglicans in Europe or North America who were shy in sharing their faith in places of physical safety and comfort “need to take confidence in Jesus Christ.”

“Some people need to go to prison for political incorrectness,” he observed.

Andrea Minchiello Williams, director of the UK’s Christian Concern spoke of the growing climate of intolerance of religion in Britain. She spoke of her agency’s work in offering legal advice to three Christian street preachers who had been arrested for offending the sensibilities of non-believers.

“We’ve lost our love and passion for Jesus Christ, We need a church that will speak  passionately and fiercely for him in the public sphere,” Ms. Minchiello Williams said.

The Rev. Paul Perkin, the UK coordinator for Gafcon, described the Church of England as a “wordly” institution that had succumbed to the culture around it.

While there were “many flourishing local churches,” the Church of England had been “divided by unbelief” and possessed a “superficial unity masking heterodox beliefs.”

A “superficial unity” masked “heterodox beliefs, he said and “some diocese’s leaders have departed from faithful ministry.”

“There is a battle for Britain in our own day, for the heart and soul in Britain.” Gafcon should “support those who stay in the structures and those who move beyond,” Mr. Perkin said.

The Rev. Rod Thomas, chairman of Reform told Anglican Ink stated that it was possible to be a conservative evangelical cleric in the Church of England, but one should not expect preference, support or sympathy from the hierarchy.

However the Rt. Rev. Henry Scriven, the SAMS-CMS South American director, observed the picture was not so bleak. “Four of the five senior bishops of the Church of England were evangelicals”, he said, adding the vast majority of the House of Bishops were “solid, orthodox men.”

Bishop Richard Ellena of Nelson, New Zealand spoke of the problems facing his diocese and traditionalists in New Zealand. Its geographic and theological isolation made life hard for traditional Christians. “Just being together is a challenge,” he said.

The Bishop of Recife Miguel Uchoa spoke of the events surrounding his diocese’s secession from the Anglican Episcopal Church of Brazil. Recife was a “diocese without a province” he said. Recife was “not alone” though. “My province is Gafcon,” he said.

The conference continues through Saturday.