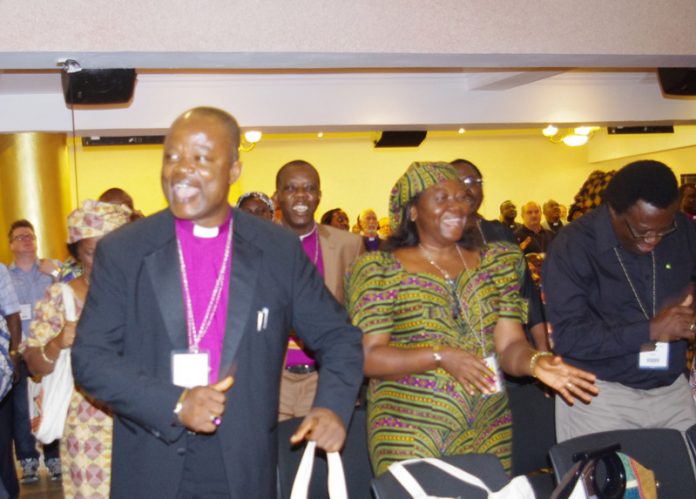 Revival and repentance were the themes of the first day’s session of the 2nd Global Anglican Future Conference in Nairobi this week. East African revival.

On 21 October 2013 Archbishop Eliud Wabukala of Kenya, Canon Alfred Olwa of Uganda, Bishop Sampson Mwaluda of Kenya, Archbishop Donald Mtetemela of Tanzania, and Archbishop Onesphore Rwaje of Rwanda spoke of the significance of the East African Rival that ran from the 1930’s to 1970’s in the evangelization of Africa.

Prof. John Senyonyi, vice-chancellor of Uganda Christian University offered a historical overview of the revival and its contemporary relevance for Anglicans. “If you are to get anything from East Africa at Gafcon 2, revival begins with an individual,” he declared.

“Revival doesn’t begin with the church, it begins with me when the Holy Spirit convicts me [of my sin], I bow and say ‘Lord, may you begin with me’,” he said.

Sin was ever present in our lives and we must endeavor to pursue personal holiness however, Archbishop Rwaje warned. Rwanda had been the birthplace of the revival  and he had come to faith through its influences. However, Rwanda was also the home of the genocide – a mark of human depravity.

One of the marks of the revival was the conviction of the human heart. Through the Holy Spirit “God brought unflagging zeal for revival and conviction of sin” to the hearts of man Prof. Senyonyi said.

But this spiritual awakening had to be guided by the Scriptures, he said. “The Bible is precious and true,” he said, and it serves as our guide. “If it says ‘this is sin’ it is sin.”

Dr. Peter Jensen told reporters the divisions over the doctrine of Scripture underlay the church’s fights over sexuality. He applauded the Archbishop of Canterbury’s call to return the Bible to the center of the life of the church made in his sermon Sunday at All Saints Cathedral Nairobi, but was uncomfortable with the implication the Bible could not be understood without the aid of experts.

Citing Erasmus aphorism “I wish that the farm worker might sing parts of [the Gospels] at the plow, that the weaver might hum them at the shuttle, and that the traveler might beguile the weariness of the way by reciting them on the way,” a spokesman for the archbishop stated Dr. Jensen believed Scripture was not the preserve of academics or the property of clerics but a gift to all believers.