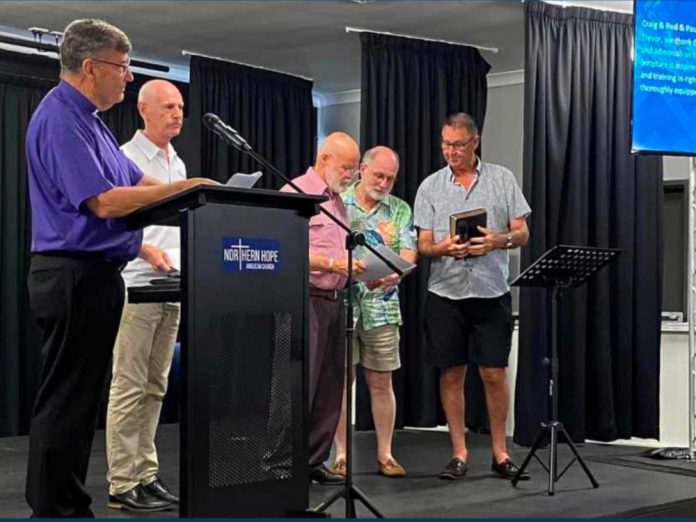 Cairns is the location of the third local church in the new “Diocese of the Southern Cross,” formed by the conservative Anglican Network Gafcon (Global Anglican Futures Conference). Trevor Saggers, minister at Good Shepherd Church in Cairns, has left that church to form Northern Hope Anglican in a rented hall.

“On Sunday, 8th January 2023, Bishop Glenn Davies commissioned the Reverend Trevor Saggers as the pastor of Northern Hope Anglican Church and welcomed 120 people who gathered in a rented hall with their pastor,” according to a Gafcon post.

Glenn Davies, the former Anglican Archbishop of Sydney, became the Bishop of the Diocese of the Southern Cross last year, formed to take care of churches that may decide to leave the “official” Anglican Church of Australia over LGBTQIA issues. Northern Hope joins two new Brisbane churches that joined the diocese last year. Conservatives such as the diocese of Sydney support the “Diocese of the Southern Cross”. Still, it has no official standing with the denomination. (“Diocese” usually refers to a region of a church headed by a Bishop such as the Anglicans, Catholics or Orthodox.)

“There is much pain as the Parish of the Good Shepherd Church (TGS) has been badly divided, with the Assistant Minister and the Wardens deciding that God has called them to stay rather than go,” Bishop Keith Joseph tells The Other Cheek. “The new group has set up in direct competition with The Good Shepherd Church, and the hurt and pain and messiness is considerable. There have also been some adverse reflections on myself which are based on misrepresentations rather than truth, and other actions taken by the new group which are regrettable. However, my aim as a pastor is not to respond in detail to any personal attacks and not to dwell on the other problems, but rather to help the people at TGS to continue worshipping our living God and follow our Lord Jesus Christ. They will continue to thrive as a church in the conservative evangelical tradition of Anglicanism in spite of this messiness and pain. I will put out an Ad Clerum in the next few days to address these issues in greater detail.”

Saggers writes: “It was a costly and painful decision to leave behind a church building, where many of them had worshipped God for several decades, knowing that not all the members of their former church home would join them, but there was no doubtthatGod’sss hand was upon them in this new venture. The service was a wonderful celebration of hearing God’s word, singing his praise and bringing their prayers and thanksgivings before his throne.”

The reason given for Saggers and some members of the evangelical Church of the Good Shepherd in Edge Hill, Cairns, to leave was the vote of the Bishop of North Queensland, Keith Joseph, at last May’s Anglican General Synod (church parliament). At that meeting, the Bishops vetoed a statement opposing same-sex blessings and stating that one-man-one-woman marriage is the only form of marriage taught by Jesus. The General Synod has three houses – Bishops, Clergy and Laity. These three houses sit together and vote together unless a vote by individual houses is requested. Evangelicals and conservative Anglo Catholics gained solid majorities among the Laity and Clergy in last year’s General Synod, which until then was solidly progressive.

Although it was a secret ballot, most [edit: some] observers would put Bishop Keith Joseph among the 12 bishops who voted down the motion. He has been an outspoken critic of Gafcon, describing it as a danger to the Anglican communion. The Melbourne Anglican reported his reaction to the launch of the diocese of the Southern Cross. “Bishop Joseph said he believed [Gafcon’s] Jerusalem Declaration went ‘well beyond’ traditional orthodoxy by focusing on ethics as well as doctrine. He said the inclusion of ethical issues such as sexuality in a statement of faith was irrelevant, as ethics tended to shift over time.”

UPDATE: However, Bishop Keith Joseph has told TheOtherCheek that he was one of the two bishops who abstained. His reason was not because he opposed the statement but in protest at the campaigning politics at the Synod.

This questions the reason Gafcon has given for the split. (update: or the fact that the bishop abstained rather than be among the 12 no-voters is hard to tell from the way the Gafcon statement is written. A failure to vote in favour is the reason given.)

The Other Cheek understands that a few evangelical churches in North Queensland have provided much of the vitality of the local Diocese, with Edge Hill being one of them. Bishop Keith Joseph’s undertaking to maintain Edge Hill as conservative evangelical is significant.

The Diocese of the Southern Cross is likely to attract local churches to defect to it from the Anglican Church of Australia, where Bishops or Dioceses support blessings of same-sex civil marriages.