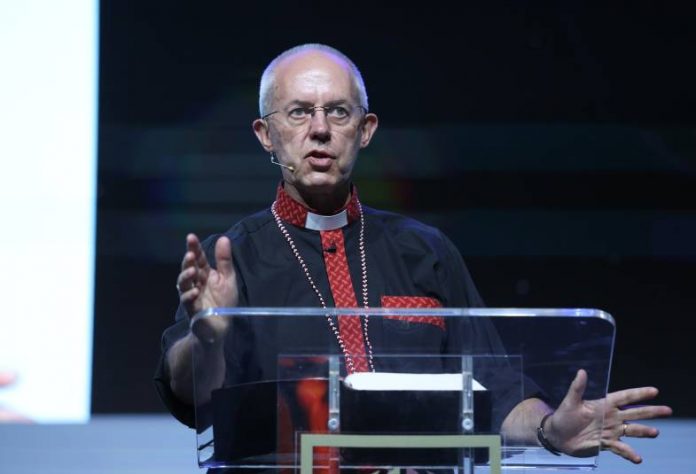 Five hundred years ago Protestants made rather a lot of fuss about people purchasing advance tickets to paradise through the sale of indulgences — three hundred years off purgatory if you buy a new pew; ten thousand if you fix the church roof; direct to heaven if you can give long term employment to a dozen or so monks to pray for your immortal soul. The Church of England really ought to consider it as an innovative new funding model, but at the moment it appears to be keener on going into the business of buying rather than selling salvation.

This week the Archbishop of Canterbury announced that £100 million pounds had been found (where, many are asking? Does one of those Sunday school Jesse trees double as a magic money tree? Did John Dee discover the secret of turning lead into gold and leave it with our established church?) to serve towards making reparation for the Church’s alleged involvement in the transatlantic slave trade.

What does this participation involve? It goes back to 1704 and Queen Anne’s Bounty, a scheme whereby part of the taxes on church property would be diverted to improving the incomes of poor clergy. This scheme would later form the financial basis of the Church Commissioners who now manage much of the wealth of the Church of England. According to the report by the Church Commisioners, some of these funds were invested in the South Sea Company, which had a monopoly on the British slave trade in the South Atlantic. Moreover some of the bounty was formed from donations, of which a portion came from slave traders like Edward Colston.

You can see the narrative forming already: the Church of England — that great edifice of English tradition, respectability and humble, understated piety — is actually built on the backs of African slaves, its wealth and properties purchased through brutal imperialism. There are a few awkward details, however, which may have already occurred to those readers who belong to the dwindling portion of the British population that knows its history.

The South Sea Company is familiar to their ears because it is of course associated with the South Sea Bubble. Shortly after the company was formed, Britain was at war with Spain and Portugal, who happened to own most of South America. Of the over 12 million slaves transported across the Atlantic, and the 3.1 million transported by Britain, the South Sea Company transported only 34,000. With the disastrous performance of the company, its investors not only failed to profit from it, but many were in fact ruined by it.

It is not as if the world lacked for present injustices

This is an economically illiterate argument — if capital does not increase in value, then you have not profited from its dividends; you have merely robbed Peter in order to pay Paul less. It only makes sense if the argument is not actually about material gain from the slave trade, but instead about an idea of moral contamination. This serves to explain the mournful (and hopelessly vague) claim that follows: “Many of the individual benefactors were, or may have been, linked to transatlantic chattel slavery (for example, Edward Colston was a benefactor) and so to some extent their benefactions may have been derived from the profits of transatlantic slavery or the plantation economy.”

Because three hundred years ago money was invested on the Church’s behalf in a sinful enterprise, or because three hundred years ago wicked men with dirty money gave it as charitable donations to the Church, today modern, progressively-minded Anglican clergy and administrators feel themselves to be sullied. They quite welcome this realisation, one suspects, because it gives them an opportunity to lavishly involve themselves in a very fashionable cause célèbre — America’s “racial reckoning” following the killing of George Floyd by the police.

According to the vague and opportunistic logic of the modern progressive orthodoxy around race, racism is “structural” — which is to say, so diffuse and broad as to implicate every single white, western person and institution. Having established its tenuous link to the slave trade, the Church of England can cheerfully get stuck in (several years late, as is its stately way) to some institutional self-flagellation (just to complete the picture of inverted medieval piety).

The Revd Marcus Walker and others have already pointed out the irresponsibility and cruelty of spending this much money — money carefully entrusted for the purpose of maintaining Christian worship in this country — when parishes are being shut down, losing priests, and Christianity in Britain is itself under threat.

It is not as if the world lacked for present injustices — events in Iran, Ethiopia and China should exercise the conscience of the Church much more than three hundred year old unethical investments. What, for that matter, about Christians persecuted and driven from their homes across the Middle East and North Africa by Islamic fundamentalists? Or viciously attacked by Hindu nationalists in India? If the Church of England won’t fund its own worship, and won’t stand up for those who share its Christian faith overseas, just who does it stand for?

Though I have never agreed with the Revd Giles Fraser’s case for disestablishing the Church of England, it is hard to dispute the argument