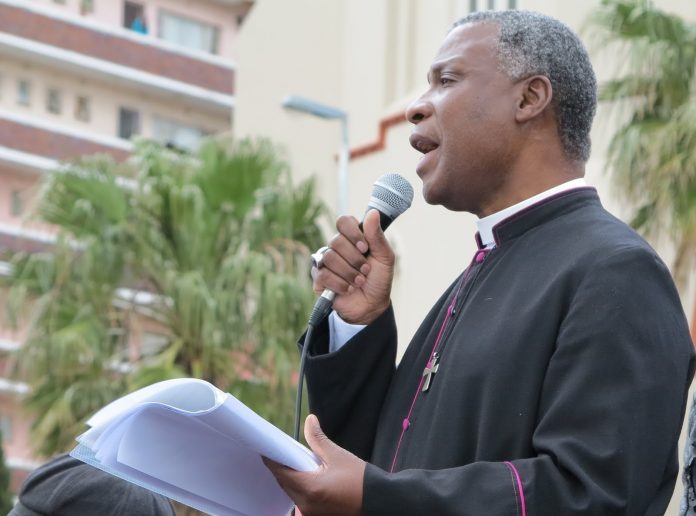 On behalf of our church, I have sent our condolences to the President of the Catholic Bishops’ Conference and the Catholic Archbishop of Cape Town on the passing of Pope Emeritus Benedict XVI. We pray for the repose of his soul – may he rest in peace and rise in glory.

Compliments of the season, and a Happy New Year to all! It is my hope that in 2023 Anglicans will take a lead in our various societies in Southern Africa in wrestling with the question of how we can put aside personal greed and self-advancement, and work together with others to pursue with vigour that which will help us to become part of something bigger than ourselves.

I refer of course to what you have heard me consistently advocating over recent years, and that is the New Struggle – a new struggle for a new society, a society of compassion and caring, a society in which we end inequality of opportunity and improve the lives of the poorest of the poor.

Looking beyond the weeks of joyful celebration of Christmas and the New Year, looking beyond the wishes of goodwill generously shared with one another, the pursuit of the New Struggle has the potential to establish a new basis for our spiritual, economic, political and social lives: a morally virtuous framework that could and should unleash a sustainable wave of real change, or – as some describe it – a movement of transformative improvement and a re-prioritisation of the needs of our diverse communities.

To express the hope for such a movement is not wishful thinking. Hope, as I have said before, is not a nebulous, pie-in-the-sky concept. No, hope is the driving force which which motivates our determination to name our problems, to identify solutions to them and to mobilise people to overcome them. Hope must be what drives us to work to fulfill our Constitution’s promise of a society based on democratic values, social justice and fundamental human rights.

In recent days, the sad, racist attack on black children – including family members of retired Bishop Meshack Mabuza of Swaziland – at the Maselspoort holiday resort outside Bloemfontein once again brought home the urgency of dealing with the hate and prejudice which still pervades South Africa. Just as urgent is the need for civil society, including the Church and other faith communities, to refuse to surrender the human rights of the most marginalised: shack dwellers, refugees and economic migrants from other parts of Africa and the LGBTQI community.

When I was in Ukraine just before Christmas, the Jewish community was celebrating the miracle of Hanukkah, the eight-day festival which commemorates the miracle of olive oil, which was supposed to burn in a lamp for only one day, actually keeping alight for eight days. Similarly, in so many ways, by so many means and at so many times in our recent history, civil society has kept alight candles of hope to lighten the darkness in our societies in Southern Africa. And as we move into Lent soon, we will make Bible studies available to help Anglicans to light candles of hope for our Palestinian sisters and brothers, that they too may share the freedom, security, peace and justice we desire for all those who live in the Holy Basin.

In South Africa, civil society has been at the core of the New Struggle, a major contributing factor which prevented the dismembering of democracy as our Constitution came under assault in recent years. In this struggle, Christians have held out the hope of what we might describe as a Pauline renewal, offering to society a vision of the abundant life promised by Jesus.

Now we are facing profound new challenges in South Africa. As we’ve seen others ask, “How do you shame a shameless government and political parties into being movements of the people, committed to the common good rather than existing for their own and their families’ self-advancement?” How can we say that the voices of the people are being heard and acted upon when we see our political leaders living the high life while claiming there is no money for service delivery, basic education and healthcare? Where does this societal deafness and social arrogance come from?

Ukraine reminded me that it is possible to have key leaders who are capable, authentic champions of civil society, leaders who can create an infrastructure that will not allow populism, public violence and violet extremism to define 2023 and the years beyond. In South Africa we need leaders who can fulfill their constitutional obligations, ensuring that social problems are addressed, ensuring that the new era of African democracy becomes a reality in South Africa too. Such leaders will recognise that our future is not just in the hands of politicians but that all the country’s economic and social formations must be brought into the narrative so that everyone, including the poor, is listened to for their ideas, insights and solutions.

Sadly, we are coming to the collective realisation that if our current government is incapable of self-correction, then a new coalition of forces is essential. Here are the realities that such a coalition will have to face up to:

1. Poverty is not by accident, it is by design — lower-income, less educated, voiceless people are so much easier to control.

2. In the social context, South Africa has the highest unemployment rate in the world — with 66.5 percent youth unemployment,

3. In the Human Development Index compiled by the United Nations Development Programme, South Africa ranks in the second-lowest quartile. Half of the adult population lives below the poverty line and 19 million of our 60 million people are dependent on social grants. No less than 47 percent of households ran out of food during Covid-19 lock downs.

6. In the larger context, the world is moving away from financial stability, predictable financial markets, low interest rates and low inflation. The world is now characterised by unpredictable external shocks and increased volatility brought on by climate change, worsened by the Covid pandemic, and now amplified by Russia’s unprovoked, unwarranted and unjustified invasion of Ukraine and climate change.

We must come together to address these realities. A plethora of independent movements is not enough. Whether under the umbrella of the New Struggle, or some other vehicle that embraces all voices, from the poor, to the spiritual leaders of our country, to the leaders of business and labour, we need an alliance of leaders and forces to say: “Enough is enough!”

Your futures, our countries’ futures are in our hands. It is time to heal our political polarisations, to recognise that the chasms between rich and poor cannot be tolerated and that overcoming inequality of opportunity is the solution to unemployment. We are so blessed to be living here in this century. It’s in our hands to shape the future and to give our children and grandchildren their best possible futures.

In 2023, how will we leave behind personal greed to become part of something bigger than ourselves? The answer: the New Struggle!

As I prepare to go away until 9th February on my post-Christmas break, my warmest wishes go to you at this Epiphany. And remember: God loves you, and so do I.