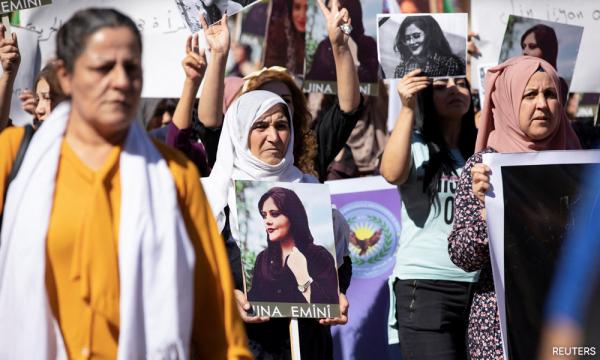 Iranian authorities are targeting minorities, especially Christians, in order to stem street protests, now in their third month, following the death of Mahsa Amini, a 22-year-old Kurdish woman, at the hands of morality police.

As Iranian security services become more threatening, the message, in not so many words, is to “stay away” from the demonstrations and not get involved in the wave of unrest against the Islamic Republic, against the regime’s top clerics, against Shari‘a-based rules, such as compulsory head covering, starting with the hijab, which has become a tragic symbol of death.

As one Christian leader noted, Christians as well as other minorities are feeling the heat, subjected to intimidation and pressured to remain silent and not participate in protests.

Yonathan Betkolia heads the Assyrian Society of Tehran. He is cited by the semi-official ISNA news agency that members of Iran’s intelligence and security services have asked Christian representatives, including bishops and priests, to prevent their co-religionists from joining the protest movement.

Such warnings by the authorities suggest that Christians are more involved in street protests than at the start of the unrest.

In the past, Iranian Christian groups have criticised Bektolia, a five-time member of the Iranian parliament, the majlis, for “collusion” with the authorities.

In a recent statement, the Council of United Iranian Churches slammed the “systematic repression of women and human rights violations in Iran”, demanding “freedom, justice and equal rights” for everyone.

“Like many people of our country who protested in the streets with unparalleled courage after Mahsa’s death,” the Council notes, “we oppose the imposition of the mandatory hijab (head scarf) on the people of Iran,” who are characterised by “religious, ethnic, cultural and ideological diversity.”  This is “a definite violation of human rights.”

Recently, Article18, a Christian-based NGO, reported that Iranian Christian leaders and lawmakers have warned members of their communities not to get involved in the protests.

According to some sources, scores of young Chaldeans and Assyrians, who joined recent protests and posted messages of support on social media, received phone calls from Church leaders telling them that they would be arrested if they did not stop.

In replying, some activists said they might be “Assyrian but we are also Iranian, and we live in this country. It’s our country too!” For this reason they intend to fight for freedom and rights.

Iran is home to about 25,000 Assyrian Christians, who together with about 100,000 Armenians constitute the community that is officially “recognised” by the Islamic Republic.

There are also Muslim converts, who are not, however, counted by the authorities and who are often persecuted.

Since the death of the young Kurdish woman in mid-September, protests morphed into a popular uprising in favour of freedom and rights.

For many experts, this is the most serious threat to Iran’s theocratic regime since 1979, but there is little chance that it will undermine the system; for their part, Iranian leaders blame the West for fomenting unrest.

So far, the crackdown has cost the lives of almost 400 protesters, including scores of minors. Thousands have been arrested while six have already been sentenced to death.