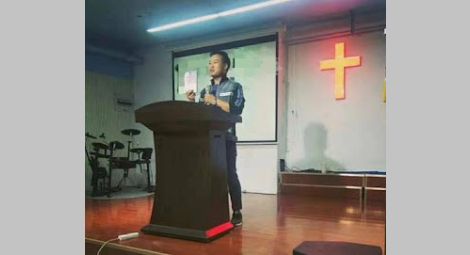 CSW is calling for the release of five Christians who have been detained in a rural area in China’s southwestern Yunnan province, near the border with Myanmar, since early August.

According to a source familiar with the situation, Wang Shunping, an ethnic Nu Christian preacher from Fugong county in Nujiang Lisu Autonomous Prefecture, was taken into administrative detention along with four others by Fugong police on 2 August 2022. On 17 August, the five Christians were placed in criminal detention, meaning that the time they spend in detention from that date will count towards any jail terms if they are convicted.

On 16 September, Fugong police requested approval from the Procuratorate to formally arrest Wang, who has two young children, on charges of ‘organising and sponsoring an illegal gathering’.

CSW’s source believes that the Christians were targeted because they rented a house in Fugong where they had held a few Christian gatherings and given free guitar and hymn lessons to some young people, which was reported to the police.

Wang’s lawyer has made a submission to the Procuratorate appealing to the procurator not to approve the arrest of Wang Shunping on the basis that it is unconstitutional. However, it is understood that there is “little chance” that the procurator will adopt this opinion. The situation for the other four detainees is currently unknown.

CSW’s CEO Scot Bower said: “CSW calls for the immediate and unconditional release of Wang Shunping and all those detained or imprisoned in connection to the peaceful exercise of their religion or belief. These Christians have clearly been targeted for gathering to practice their faith, as is their fundamental human right, and yet they have now spent over seven weeks in detention. The international community must show China that such conduct is unacceptable by raising these and other cases at every opportunity in both direct and multilateral dialogues with the country, such as at the UN Human Rights Council.”

Nujiang has been home to a Christian community since the early 20th century, however some have observed that the Chinese authorities have been trying to eliminate influences from Western missionaries as part of their campaign to Sinicize religion, which has also seen many Christians detained in recent years.

On 14 August 2022, author and missionary researcher A Xin (aka Xing Hongwei) was detained amid a police raid on a Sunday service of Early Rain Covenant Church in Chengdu. He was released on bail 12 days later.

Events in the prefecture appear to be part of a wider crackdown as the Chinese Communist Party (CCP) prepares for its 20th National Party Congress, which is set to be held from 16 October. On 12 August, Geng Zejun, a preacher of The Rock Church in Shijiazui in the northwestern Ningxia Hui Autonomous Region, was sentenced to 15 months in jail for ‘organising illegal gatherings’, which were attended by less than 20 people.

On the evening of 19 August, more than 100 police officers raided an outdoor family event attended by members of Linfen Covenant House (“Shengyue Jiayuan”) Church in Shanxi province. Two preachers, Li Jie and Han Xiaodong, have been criminally detained on suspicion of fraud. According to a report by Chinese human rights site Weiquanwang, several members have been summoned and interrogated by criminal investigation officers, who “use all sorts of methods to coerce them to provide witness statements as victims of fraud”.

Scot Bower added: “We welcome the news of Christian author A Xin’s release on bail but are concerned that the CCP is increasing its efforts to crackdown on religion and belief groups in the lead up to the Party’s 20th National Congress. We call on China to end its violations against all religion or belief groups in the country, including the practice of RSDL, which has been recognised by the UN as a form of forced disappearance.”