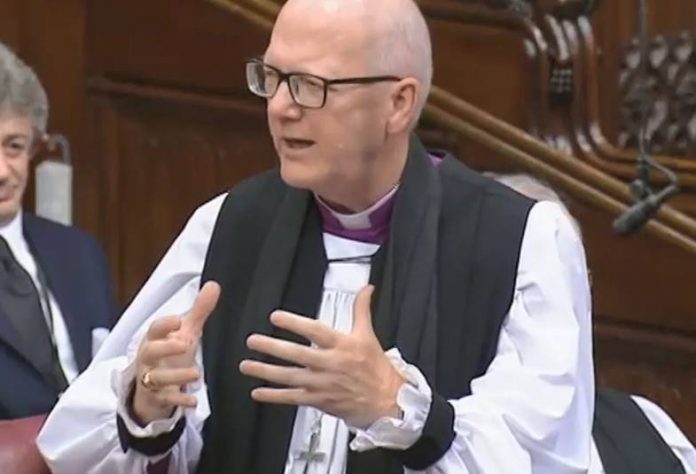 The Bishop of St Albans, Alan Smith, has been appointed by the Archbishop of Canterbury as Convenor of the Lords Spiritual. Bishop Alan Smith takes over the role of coordinating the work of the 26 bishops in the House of Lords from the Bishop of Birmingham, David Urquhart, who has served as Convenor since 2015 and who will be retiring as a diocesan bishop in October. Bishop Alan takes on the role of Convenor with immediate effect.

“I am delighted to take on this important role. Bishops serve in the Lords to be a voice not only for faith, but for those on the margins in communities we serve up and down the country through our parish networks. We have a constitutional role, and lead the House in prayer every day, but we also play a full and active part as Members of the Lords in holding Government to account and arguing for laws that best serve the common good. A new Government brings with it fresh challenges and opportunities to pursue that work.

“I pay tribute to Bishop David, who as Convenor these past seven years, has been a wise and steadying presence during what have been turbulent times for Parliament and our nation.”

“I am pleased that Bishop Alan has accepted my invitation to be the next Convenor. He is an excellent parliamentarian and has built up a strong track record of pursuing just and important causes, often working cross-party to deliver change on issues as varied as gambling-related harm, human rights,  religious freedom, and environmental protection.

“The Convenor is relied upon to engage with the leaders of other benches across the House on legislation and procedure, and I have no doubt that Bishop Alan will serve the House and the Bishops’ Bench extremely well”.

“Bishop David Urquhart, who has served us as Convenor these past seven years, has seen us through some challenging times, in Parliament and in the nation. With his characteristic skill and aplomb, he has strengthened relations behind the scenes and has provided the Lords Spiritual with encouragement, assurance and wise counsel. He will be much missed.”

“This has been an eventful seven years, with much change, not least that brought by Brexit and the pandemic. On our own benches we welcomed the first women to serve as Lords Spiritual and it has been my privilege to help our new colleagues find their feet, and to work alongside them; they are a great asset to the House. I am happy to be handing over to someone who is as skilled and enthusiastic about parliament and the work of the Lords as Bishop Alan. He has my prayers and my best wishes for the future”.

Bishop Alan Smith joined the House of Lords in 2013. He has a wide range of interests and has been involved in numerous Bills, campaigns and causes, from regulating fixed-odds betting terminals and wider regulation of the gambling industry, adding mothers’ names to marriage certificates, to ensuring leaseholders received protection from the cost of replacing unsafe cladding post the Grenfell fire. In 2016 he was a leading voice against Government proposals, later abandoned, for further liberalisation of laws on Sunday trading. He regularly raises issues of human rights and religious freedom overseas, including the treatment of the Uyghurs in China. Bishop Alan currently leads for the Lords Spiritual on rural affairs and agriculture. In the last session of Parliament his amendments to the Police, Crime, Sentencing and Courts Act led to the Government strengthening deterrents on illegal hare coursing.  He has introduced private member’s bills during his time in the House of Lords on marriage registration, and recording gambling-related deaths. His latest Coroners (Determination of Suicide) Bill [HL] will be debated in the Lords soon.

Bishop Alan Smith has been Bishop of St Albans since 2009. Biographical information can be found on the St Albans website.

What is the Convenor of the Lords Spiritual?

The Convenor of the Lords Spiritual ensures that the work of the bishops in Parliament is coordinated and supported and that the interests of the Bishops’ Bench are represented. The Lords Spiritual sit as independent non-aligned members of the House of Lords and, in common with the independent crossbench peers, do not follow a party line or whip.  The Convenor is the primary point of contact and liaison on behalf of the Bishops’ Bench for the party and group leaderships in the Lords, the Lord Speaker, officials and business managers.

Bishop David Urquhart was appointed as Convenor in May 2015. In addition to his Convenorship he has led for the Lords Spiritual on issues of political and constitutional reform, economic and business affairs. Bishop David was appointed Bishop of Birmingham in 2006. He will have served almost 16 years as a diocesan bishop, including 12 years as a Lord Spiritual, when his retirement takes effect on October 18th.

Bishop David’s time as Convenor began while David Cameron was Prime Minister. Major events during his time in post have included two general elections, the EU referendum and subsequent UK withdrawal, and the Covid-19 pandemic, during which Parliament moved to virtual and then hybrid sittings. Bishop David was also lead for the Lords Spiritual on preparations in parliament for the ceremonies marking the late Queen Elizabeth’s passing and her Lying-in-State.