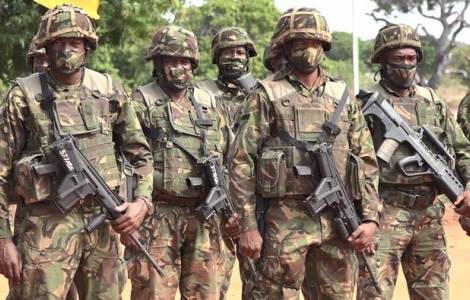 Northern Mozambique where the Comboni missionary Sister Maria De Coppi, among others, was killed on September 6 during the attack on the Chipene mission, is increasingly at the center of the interest of various States.

The provinces of Cabo Delgado and Nampula (where Chipene is located) are threatened by the
insurrection of jihadists affiliated with the Islamic State’s Central Africa Province (ISCAP – Mozambique). The conflict has so far displaced more than 800,000 people, according to the latest figures from the International Organization for Migration, and killed 4,000 people.

On September 21, Tanzania and Mozambique signed an agreement for the joint fight against jihadists, who also hit some Tanzanian border towns. An intervention force of the SADC (Southern African Development Community) called SAMIM (SADC Mission in Mozambique) and a Rwandan military contingent are already deployed in northern Mozambique.

One of the biggest contributors to SANIM is South Africa, whose president, Cyril Ramaphosa, has asked the United States for support to counter the insurgency in Mozambique. South Africa fears an extension of Mozambican instability to other countries in the region, but above all wants to protect its investments in the country, particularly in the energy sector.

The US government announced in April that Mozambique had been selected as a “priority country for the national conflict prevention strategy”.

US military have been training their Mozambican counterparts for some time now.

The large oil and gas reserves concentrated in the north of the country are considered increasingly strategic in the European policy of seeking alternatives to Russian gas. It is no coincidence that the companies involved in their exploitation include French and Italian oil multinationals.