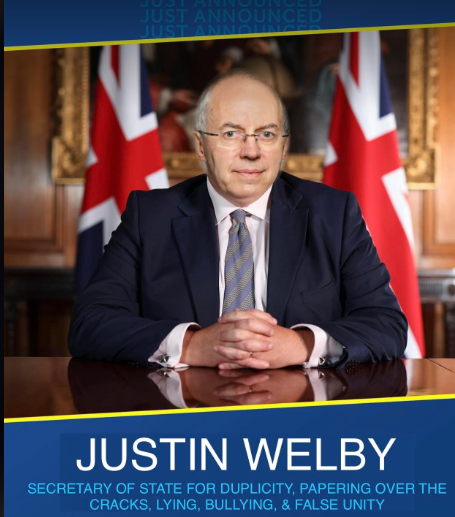 It is well established that the Church of England House of Bishops considers itself a political party rather than anything religious. In fact they consider Christianity dangerous. In fact some of them found the Lambeth Conference more tedious than the rest of us did and are very happy that today they were back in parliament. So it is known that they would very much like to be the party of government. But what would this pseudo-theocracy look like? How would those Socialist Puritans with their New Model Army of Wokists and various middle class social misfits govern? Clearly it would be the worst government in history, making Cromwell’s government look like a harbinger of joy. It would be lead by Mr Welby

Comrade Welby would lead a government of duplicity, speaking out of both sides of his mouth, covering up abuses of government bullying those who disagree and claiming there is a united front as if all agreed with his woke nonsense. He will claim that his government is in unity when it is in fact in chaos. His Deputy would be Bishop of London, Sarah Mullally.

Mrs Mullally will bring in laws making it illegal for black people to say they are not the victims of racism. She shall launch deadly smear campaigns against those who oppose the CofE government with snide Emails and shall plot to remove troublesome people like Christians from being members of the CofE party. She shall bring in safeguarding practices designed to protect the abusers rather than the victims and shall deal with the financial side of running the country with money going missing. But she shall be competent at nothing.

Next there will be Archbishop of York, Stephen Cottrell.

Mr Cotterell will make government inefficient by sacking ministers and replacing them with middle managers. He shall spend a fortune on PR and make vacuous statements to the press.

Under Mr Cottrell will be the Bishop of Durham, Paul Butler.

Read it all at A Riverside View