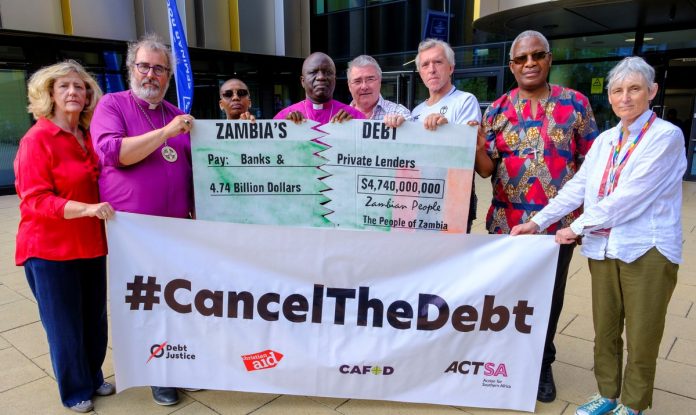 The Archbishop of Wales and the Bishop of St Davids joined bishops from around the world this week calling for the cancellation of debts for low income countries.

They want the UK Government to lead the way in compelling lenders to cancel debts that are plunging communities into hunger and poverty.

In a symbolic act, organised by the charities, Christian Aid and Action for Southern Africa at the Lambeth Conference, the bishops ripped up a cheque representing the debt payments that lower income countries like Zambia are making every year.

Zambia is the first country to seek debt restructuring under the G20’s new Common Framework, launched in 2020. The country is negotiating a debt restructuring with creditors, including the UK-based asset management firm BlackRock. Debt Justice has estimated that BlackRock could make $180 million profit if the debts are paid in full.

Rocketing food and fuel prices, in part due to Russia’s invasion of Ukraine, in the context of a continuing pandemic and lack of access to vaccines, are intensifying the debt crisis facing lower income countries.

The Archbishop of Wales, Andrew John, said, “You don’t knock someone when they are down. Our poorest countries are already on their knees as a result of the pandemic, climate change and conflict. Debt repayments on top of that are the killer blow for so many. It’s time for lenders and governments to show moral and just leadership and offer the hand of compassion by cancelling debts.”

Archbishop Albert Chama, the Archbishop of the Church of the Province of Central Africa, said, “Zambia is in a debt crisis, with spending on social services falling by over a fifth between 2019 and 2021 alone.

“Because of this, ordinary Zambians lose out on healthcare, education and development projects which would give them a fair chance to thrive and build futures, like people in the UK, Europe and the USA.

“For too long, by chasing excess profits on loans, private capital in wealthy countries has put the lives of people in low-income countries in jeopardy. It has to stop now.”

“I stand with Action for Southern Africa, Debt Justice, Christian Aid and others in condemning the unfair conditions faced by countries in Southern Africa when they need loans.”

“It is past time that BlackRock and other private lenders are compelled to negotiate terms for Zambia which do not make excess profits from those already disadvantaged by food, fuel and pandemic crises.”

Pete Moorey, Head of Campaigns and UK Advocacy at Christian Aid, said, “The coronavirus pandemic has left people who were already struggling, without a way to feed their families and survive this crisis.

“Debt repayments are taking away resources that are vital for coping with the health, social and economic crises resulting from the pandemic.

“The UK Government has a moral obligation to lead the world in compelling lenders to cancel debts that are plunging communities around the world into hunger and poverty.”