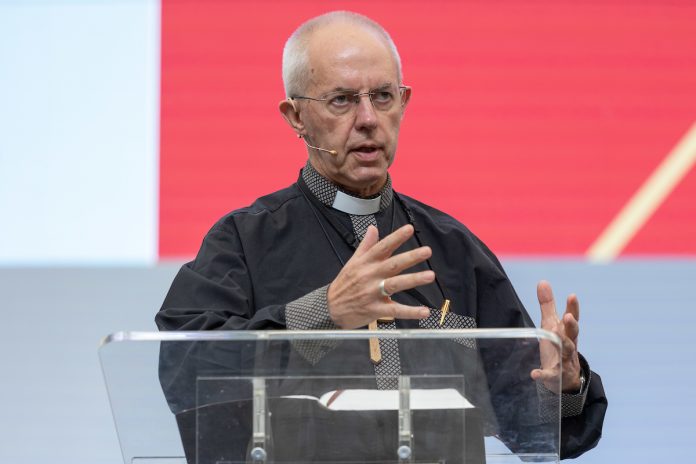 The bishops at the Lambeth Conference spent time in discussion and prayer over the Lambeth Call on Human Dignity today after hearing opening remarks from the Archbishop of Canterbury.

Archbishop Howard Gregory, Chair of the Lambeth Call on Human Dignity drafting group, opened the meeting in prayer. He thanked his fellow members of the drafting group and said it had been a privilege to have been given this assignment.

Archbishop Thabo Makgoba, Chair of the Lambeth Conference Design Group, explained that the bishops would not be asked to give verbal feedback on the Call.

After the bishops spent time discussing the Call in small groups, they concluded the meeting in silent prayer.

The specific requests set out in the Call, including the request for the establishment of an Archbishop’s Commission for Redemptive Action, are due to be considered at a later session during the remaining week of the conference.

Archbishop Justin Welby spoke at the beginning of the closed meeting of bishops to discuss the Lambeth Call on Human Dignity. Earlier today he also wrote to all bishops of the Anglican Communion.

Bishops were invited to give written feedback as they have done with other Calls during the Conference, which will be submitted to the Chair of the Lambeth Calls Working Group.

The text of Archbishop Justin’s opening remarks as delivered follows:

This is one of the most important sessions of this Conference. In it, we come to a question – of what we believe about human dignity, including sexuality – that is deeply dividing, not only for Anglicans but for every part of God’s global church.

This conference is one of the few places that we can meet and be honest with each other about what we think, listen to others and pray together. In some churches, like the Anglican Communion, the disagreement is open. In others it is behind locked doors. But in all it is real. And in all the subject is of the greatest importance.

Most of the Call on Human Dignity (including sexuality) is uncontentious. None of us would want to argue for sexual violence in conflict, abuse of the vulnerable or violence against minorities or women.

But paragraph 2.3 is very different. For some here it will be a great relief. There is no attempt being made to alter the historic teaching of the vast majority of Churches of the Anglican Communion. For some, this paragraph will be hugely painful, agonizing emotionally, for it is felt by many to state that who they are and who they love is wrong, that they are less than fully human.

So in this very brief address, please let me state some important principles.

First, the Call is about Human Dignity and also about Sexuality. The reason the two are combined is that its central theological foundation is that all human beings are of equal worth, loved by God and are those for whom Jesus died on the Cross and rose to life. As St Paul says again and again in Romans “there is no distinction”.

Second, as we discuss this, we are all vulnerable.

For the large majority of the Anglican Communion the traditional understanding of marriage is something that is understood, accepted and without question, not only by Bishops but their entire Church, and the societies in which they live. For them, to question this teaching is unthinkable, and in many countries would make the church a victim of derision, contempt and even attack. For many churches to change traditional teaching challenges their very existence.

For a minority, we can say almost the same. They have not arrived lightly at their ideas that traditional teaching needs to change. They are not careless about scripture. They do not reject Christ. But they have come to a different view on sexuality after long prayer, deep study and reflection on understandings of human nature. For them, to question this different teaching is unthinkable, and in many countries is making the church a victim of derision, contempt and even attack. For these churches not to change traditional teaching challenges their very existence.

So let us not treat each other lightly or carelessly. We are deeply divided. That will not end soon. We are called by Christ himself both to truth and unity.

Third, there is no attempt to change people’s minds in this Call. It states as a fact that the vast majority of Anglicans in the large majority of Provinces and Dioceses do not believe that a change in teaching is right. Therefore, it is the case that the whole of Lambeth 1.10 1998 still exists. This Call does not in any way question the validity of that resolution. The Call states that many Provinces – and I say again, I think we need to acknowledge it’s the majority – continue to affirm that same-gender marriage is not permissible. The Call also states that other provinces have blessed and welcomed same sex union or marriage, after careful theological reflection and a process of reception.

In that way, it states the reality of life in the Communion today. As is said in the letter, and I re-emphasise, there is no mention of sanctions, or exclusion, in 1.10 1998. There is much mention of pastoral care. As Lambeth 1.10 also states: “all baptised, believing and faithful persons, regardless of sexual orientation are full members of the Body of Christ” and to be welcomed, cared for, and treated with respect (I.10, 1998).

Fourth, many people are watching and listening, both inside and outside the Church. But we bishops, you alone and I are responsible for what is decided on this Call. When we will all answer to God on the day of judgement, we will not be able to say – and there is no vote today, but when at some point if ever we make a decision on this – we will not be able to say that I voted this or that way because others told me too. Please therefore be present, in this room or online, today. Do not spend the time looking on your phone at what others outside the room are saying. You are the shepherds of your flock as I am the shepherd of the flock that I serve. Let us not act in a way that disgraces our witness. Speak frankly, but in love.

Finally, a short comment on my own thinking. I am very conscious that the Archbishop of Canterbury is to be a focus of unity and is an Instrument of Communion. That is a priority. Truth and unity must be held together, but Church history also says that this sometimes takes a very long time to reach a point where different teaching is rejected or received. I neither have, nor do I seek, the authority to discipline or exclude a church of the Anglican Communion. I will not do so.  I may comment in public on occasions, but that is all. We are a Communion of Churches, not a single church.

I want to end by repeating this line from the Call on Human Dignity: “As Bishops we remain committed to listening and walking together to the maximum possible degree, despite our deep disagreement on these issues.

Sister and brothers, may I thank you for your patience in listening to me.”