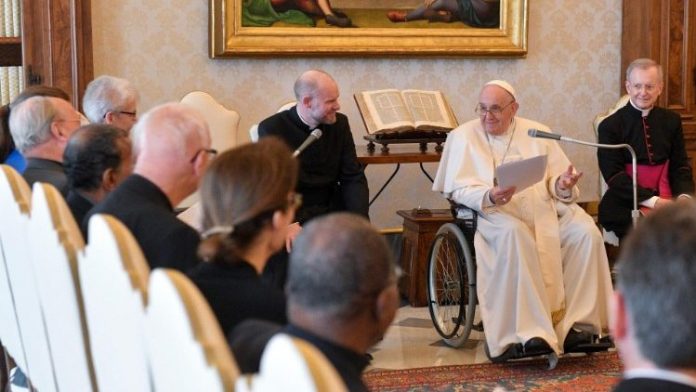 Pope Francis has reiterated the Church’s commitment to walk together with the Anglican Communion towards full Christian unity, while reflecting on the ongoing synodal process and expressing his desire to promote peace and reconciliation in South Sudan.

Speaking to members of the Anglican-Roman Catholic International Dialogue Commission (ARCIC), whom he received in the Vatican on Friday, the Pope recalled the establishment of the Commission in 1967 by Pope Paul VI and Archbishop of Canterbury Michael Ramsey, to embark on a journey of full reconciliation.

He noted that during three phases of work the Commission has sought “to leave behind what compromises our communion and to nurture the bonds that unite Catholics and Anglicans.”

“Yours has been a journey, at times fast, at times slow and difficult. Yet, I would emphasize that it has been, and continues to be, a journey.”

Reflecting on the word “journey”, the Pope remarked on the Commission’s latest document entitled “Walking Together on the Way”, which he said, means “moving forward, leaving behind the things that divide, past and present, and keeping our gaze fixed on Jesus and the goal that he desires and points out to us: the goal of visible unity between us.”

He called for mutual support, pointing out that ecumenical dialogue is a journey “that involves getting to know one another personally,” sharing aspirations and moments of fatigue, and “soiling our hands in shared service to our wounded brothers and sisters discarded on the waysides of our world.”

“It involves approaching with a single gaze and a common commitment God’s creation all around us, and encouraging one another to persevere on the journey.”

Pope Francis reminded those present that the Catholic Church has inaugurated a synodal process, and invited the Anglican Communion to contribute in this journey as well.

“We look upon you as valued travelling companions.”

The Pope did not neglect to look ahead to the journey he is scheduled to undertake in the company of the Archbishop of Canterbury and the Moderator of the Church of Scotland to South Sudan.

“Ours will be an ecumenical pilgrimage of peace”

And speaking off-the-cuff, the Pope said the pilgrimage to South Sudan – which had already been in the pipelines for years – was postponed due to local difficulties, “but my brother, Justin, sent his wife ahead to prepare the ground with works of charity… And this [is the] good work he does in his marriage, with his wife: thank you so much!”

“Let us pray that it may inspire Christians in South Sudan and everywhere to be promotors of reconciliation, patient weavers of concord, capable of saying no to the perverse and useless spiral of violence and of arms,” he said, recalling that the path began years ago with a spiritual retreat in the Vatican with the leaders of South Sudan, Justin Welby and the present Moderator of the Church of Scotland: “An ecumenical journey with South Sudanese politicians.”

Pope Francis went on to reflect on the word “gift” noting that “If journey speaks of ways and means, gift reveals the very soul of ecumenism.”

“Every search for deeper communion must be an exchange of gifts, where each makes his or her own the seeds that God has sown in the other,” he said.

Thus, warning against a formal or ceremonial attitude in this respect, the Pope called for an honest exchange regarding ecclesiological and ethical questions, that must always be conducted with humility and truth.

“The sins that have led to our historical divisions can only be surmounted in humility and truth, beginning with experiencing sorrow for our reciprocal wounds and the need to give and receive mutual forgiveness,” he said quoting from Ut Unum Sint.

“This demands courage, but it is the spirit of gift, since each true gift entails sacrifice, entails transparency and courage, and openness to forgiveness,” he said.

Only in this way, he said, will we become attuned to the Holy Spirit, “the gift of God, bestowed upon us in order to restore our harmony, for He Himself is harmony that reconciles unity in diversity.”

“The gifts of the Holy Spirit are never given for the exclusive use of those who receive them. They are blessings meant for all God’s people.”

“The graces we receive are intended for others,” Pope Francis summed up,  “and the graces others receive are necessary for us.  In the exchange of gifts, then, we learn that we cannot be self-sufficient without the graces granted to others.”

Concluding, he quoted from his own words in 2019 that the Archbishop of Canterbury cited, today, in his speech: “Unity prevails over conflict” and he expressed his belief that we must never fall into “the slavery of conflict”, but discern between crisis and conflict whereby a crisis is useful as it helps us to go beyond conflict that paves the way to war and division.