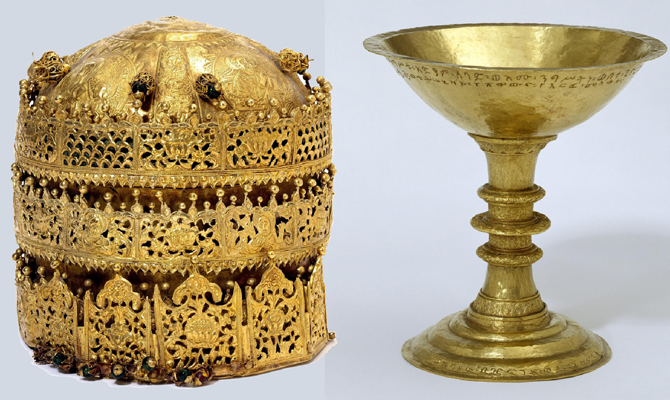 The House of Lords has been debating whether the British Museum should return eleven sacred altar tablets that were looted from Ethiopia during the 1868 Maqdala campaign led by Lord Napier.

George MacDonald Fraser’s Flashman on the March, his last and particularly well researched Flashman novel, dealt with the campaign. After a group of British diplomats was taken prisoner by Ethiopian Emperor Tewodros II, a British expeditionary force laid siege to the emperor’s Maqdala mountain fortress in what was then Abyssinia. The British quickly won, and a two-day auction of the spoils among the troops resulted in a treasure trove of Ethiopian antiquities making its way to Britain. These now comprise the British Museum’s Maqdala Collection, which includes over 80 objects, in addition to 350 manuscripts held by the British Library.

Returning these sorts of items has garnered a lot of press during the past few years, with the vast majority agreeing that they should be given back. The movement has gained momentum amid the context of the societal mea culpa around Empire and colonialism. In practice, things are often a lot more complicated. In the case of the tablets, I don’t think they should go back. Certainly not right now.

There are various arguments being presented by those who are against returning the tablets, ranging from their acquisition not being a clear case of colonial greed (the expedition after all was in response to hostages being taken), to the fact that the items taken had themselves already been looted. Before the expedition, Tewodros had the country combed for the finest manuscripts and religious items to populate a grand church and library he planned to build in Maqdala. In those days you didn’t borrow or ask nicely — Tewodrose certainly didn’t; he had his soldiers push you off the edge of a cliff if you disagreed with him.

Those arguments aren’t relevant right now. The most pressing reason for not returning the tablets is that the British establishment should be discussing and focusing on Ethiopia’s 16-month-long conflict. Instead, the international community has singularly failed to do anything about it, and the UK is one of Ethiopia’s biggest donors.

A team of researchers at Ghent University in Belgium, who have been monitoring the conflict since it began in November 2020, have calculated that up to 500,000 Ethiopians may have died as a result of the war. The estimate includes 50,000 to 100,000 victims of direct killings, 150,000 to 200,000 starvation deaths, and more than 100,000 additional deaths caused by a lack of healthcare access due to the conflict.

Even if the true number is half of that colossal sum (which incidentally is the estimated number of dead from the war in Yemen, not that you’ll hear much from the Lords on that one either), we clearly have a problem that goes beyond misplaced altar tablets.

The nature of Ethiopia’s civil war, riddled with historic grievances, ethnic hatred and myriad scores to settle on all sides, has been particularly brutal. It has included massacres of civilians — with machetes and knives — extrajudicial killings, artillery and air strikes against hospitals, churches and mosques. There has been widespread use of rape as a tool of psychological warfare, including rapes in front of family members and even forced incestuous rape. While all that is going on, the Lords is talking about altar tablets.

The dreadful conflict has also highlighted another inconvenient fact about Ethiopia, which has long been a developmental darling of the West: how dysfunctional Ethiopia’s institutions are, as are many of the politicians and bureaucrats running them. Ethiopia doesn’t have anything near the facilities, or the curating skillsets, to be found in the UK for protecting these sorts of items. Most of them are indeed truly gorgeous while also immensely fragile and vulnerable, as I can report after viewing some of the manuscripts in the bowels of the British Library. I used to visit Ethiopian museums in Addis Ababa and around the country. They are not great — the unkind might describe most of them as tragi-comic. Ethiopian culture and history abound in astonishing depth and variety, but some of those who are the most disingenuous at paying lip service to it, or leveraging it to their own advantages, are Ethiopians themselves, especially those in charge.