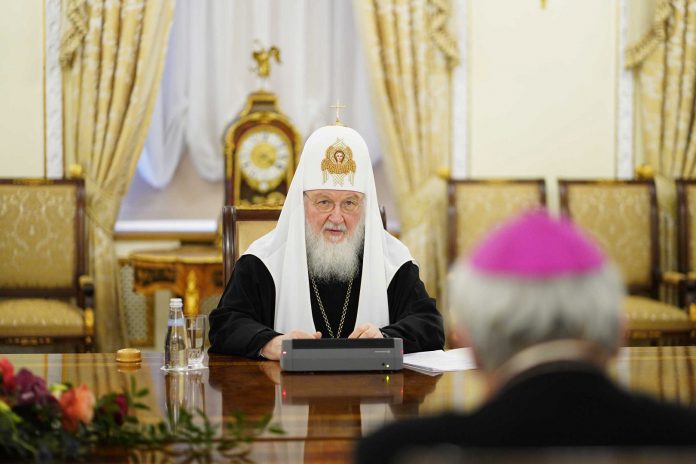 On March 3, 2022, His Holiness Patriarch Kirill of Moscow and All Russia met with the Apostolic Nuncio to the Russian Federation, Archbishop Giovanni D’Agnello, at the Patriarchal Residence at the Danilov Monastery in Moscow.

Fr om the Russian Orthodox Church, the meeting was attended by the Deputy Chairman of the Department for External Church Relations of the Moscow Patriarchate Archimandrite Philaret (Bulekov) and an employee of the DECR Secretariat for Inter-Christian Relations Ivan Nikolaev.

Archbishop Giovanni D’Agnello was accompanied by a member of the Apostolic Nunciature Priest Igor Chabanov.

Addressing the guest with words of greeting, His Holiness Patriarch Kirill noted that the Russian Orthodox Church and the Roman Catholic Church play an important role in world Christianity and the good relations that have developed between them open up prospects for cooperation in many areas.

His Holiness also stated that Pope Francis “makes an important contribution to the creation of peace and justice among people.” “I keep a very good memory of our personal meeting, which undoubtedly opened a new page in the history of our relations. We in the Russian Orthodox Church greatly appreciate that such a new page has opened,” Patriarch Kirill stated.

He pointed out that the moderate and wise position of the Holy See on many international issues is consistent with the position of the Russian Orthodox Church. “It is very important that Christian Churches, including our Churches, voluntarily or involuntarily, sometimes without any will, would not become participants in those complex, contradictory tendencies that are present on the world agenda today,” His Holiness Patriarch Kirill stressed.

“We are trying to take a peacemaking position, including in the face of existing conflicts,” he said. “Because the Church cannot be a participant in a conflict – it can only be a peacemaking force.”

The Primate of the Russian Orthodox Church stated that Archbishop Giovanni D’Agnello had experience in dealing with difficult political situations, as he had served in Latin America for a long time: “This is a very difficult continent. On the one hand, it is a continent, the majority of whose inhabitants belong to the Catholic Church. Visiting the countries of Latin America, I witnessed a strong, vivid religious feeling among the people. But, on the other hand, there are also many contradictions on this continent: social, political, economic and others, and they complicate the lives of people.”

“When the topic of my meeting with Pope Francis came up, I thought about wh ere this meeting should take place,” His Holiness continued. – “Then I thought that we should meet on the land wh ere the Orthodox have never had conflicts with the Catholics. On a continent that is combating problems and injustice, needs spiritual support and, at the same time, has never been overshadowed by inter-religious conflicts related to the theme of East and West.”

For his part, the Apostolic Nuncio in Russia cordially thanked His Holiness Patriarch Kirill of Moscow and All Russia for the opportunity to meet and talk.

Archbishop Giovanni D’Agnello conveyed the greetings of Pope Francis to the Primate of the Russian Orthodox Church, noting that it is with deep feeling that the Pontiff always recalls the meeting with His Holiness Patriarch Kirill “and especially the cordial atmosphere in which that meeting took place.”

He also mentioned that when he had left for Russia after many years of serving as Apostolic Nuncio in Brazil, the Archbishop of São Paulo, Cardinal Odilo Pedro Scherer, and the Archbishop of Rio de Janeiro, Cardinal Orani João Tempesta, asked him to convey their most cordial greetings to the Primate of the Russian Orthodox Church.

According to Archbishop Giovanni D’Agnello, his tenure as Apostolic Nuncio to the Russian Federation was an opportunity for him “to get acquainted with a completely new world, in particular, with the ministry of the Russian Orthodox Church.” “This is a valuable opportunity, including for the development of our cooperation,” he said.