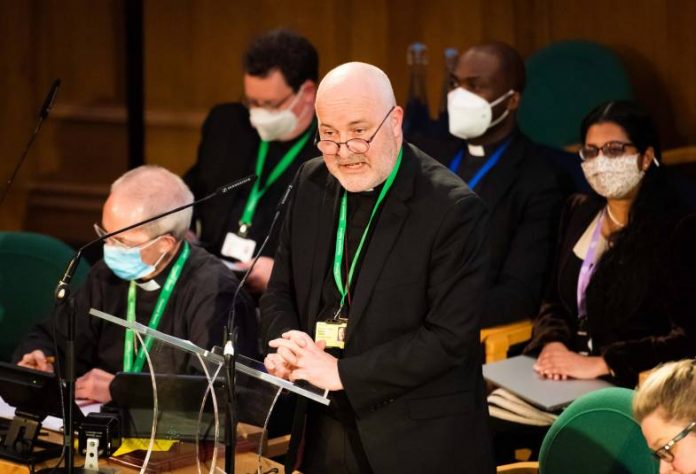 The Archbishop gave a speech at General Synod today following a presentation by the Chair of the Archbishops’ Racial Justice Commission Lord Boateng. The speech follows in full…

Dear sisters and brothers, please remind me to make a mental note never to have Lord Boateng as my warm up act. Paul, we are deeply in your debt, we are convicted by your words, and we are determined to be different.

I want to build on what we’ve heard, in what may seem a strange way.  I want to say that doctrine matters. If we follow scripture, doctrine tells us what we need to know in order to live consistently as members of the Body of Christ. ‘Doctrine therefore’, as Rowan Williams has put it, ‘serves communion’.

If one were looking for an example of new doctrinal definition in the face of lethal distortion of Christian truth, the best example might be the Barman Declaration of 1934 by representatives of the Protestant churches in Nazi Germany who affirmed, in the face of the most hideous racist ideology, that there could be no meaningful Christian fellowship with those whose pseudo theology justified discrimination and racial exclusivism. To do otherwise was to show that you do not understand the confession of Christ as Lord.

The Kairos document issued in South Africa in 1985 also appealed to the fullness of what is opened up to us in Christ as a redeemed humanity therefore challenging a state theology that sought to justify oppressive racism.

Doctrine matters. Doctrinal fidelity and theological precision are not luxuries. They shape the way we live in a Christ centred and Jesus Christ shaped church where there can be no room for racism but where we must honestly, and painfully, and penitently confess that racism is a gaping wound in the body of Christ.

Theologians matter too. No less a person than Karl Barth was the main author of the Barman Declaration, and a large group of mainly black South African theologians from Soweto produced the Kairos document.

Sometimes, the church’s opposition to racism, particularly in our own day, is dismissed as some sort of inappropriate dallying with race politics and culture wars. Not so! We make our stand on Christian doctrine, particularly on what we learn about ourselves through the revelation of God in Jesus Christ.

So, with you, Synod, I do thank Lord Boateng (and the members of the Commission) for that challenging, prophetic and sometimes uncomfortable presentation and for his willingness to chair the Commission for Racial Justice. But the reason Archbishop Justin and I have commissioned this work is because of what we believe about Christ and what it is to be a Christ centred Church and to make it clear that there can be no racism in the Church, and that we must now face up to the failings of the past and change our future: for ourselves but also for the world that Christ came to save.

We now move to a take note debate, and it is my privilege to update you on a number of areas of this work and I’m very grateful to the business committee for giving us this time.

As we have heard, the Anti-Racism Task Force was commissioned last year and through its report From Lament to Action identified 47 actions which of course included the establishment of an independent Commission for Racial Justice, all so that we can be held to account as a church and that we can deliver systemic change across the Church, and ensure a properly resourced Racial Justice Unit is set up.

The Commission has already met three times, GS 2243 starts to outline the progress.

You will see that thirty-five of those recommendations that lay within the remit of the National Church Institutions  – on them work has begun immediately, and you can see where progress is still needed. Other recommendations were reserved to take into account the thinking of the Racial Justice Commission as it emerged. However, I want to assure you that all the recommendations are being carefully and prayerfully explored both by CMEAC and the Racial Justice Commission. I say that with some feeling as many Synod members will know, I have had the privilege to be a member of CMEAC for 10 years – CMEAC is the Committee for Minority Ethnic Anglican Concerns. Some of those recommendations from some of those reports which were not acted upon, I was one of the authors of those.

Under the Chair of the Dean of Manchester and with new terms of reference, CMEAC remains the body for taking this forward. It is worth reminding ourselves, yet again, of all the work that that group and its  predecessor, [CBAC, the Committee for Black Anglican Concerns] has done.

In the coming months, CMEAC will publish new information around Race & Ethnicity, including a diocese-by-diocese report on the work undertaken on Anti-racism, racial justice, Belonging, Inclusion and Diversity, and – hopefully! – a project to commission a collection of sacred liturgical objects that will narrate the rich diversity of heritage, culture, and ethno-social community found in the Church of England and the Anglican Communion.

The resource, ‘Staying Awake in Gethsemane; Catalyst Theology for Racial Justice in the Church of England’, will be published with SCM press later this year, and will be available to dioceses so that our parishes can begin to engage more fully with this agenda.

Other work has included a national conference in collaboration with the British & Irish Association for Practical Theology and a roundtable on how to support the planned migration from Hong Kong in collaboration with the Teahouse, the support network for the Church of England East Asian and Chinese-heritage clergy. As you will remember, for those who have been on Synod for a while, there has been a variety of roundtables and activities also supporting the work of Gypsy, Traveller and Roma Networks, and Persian & Farsi speaking networks.

Synod, much is happening but there is so much that still needs to be done. All is far from well. But I think all we can do today is clearly demonstrate our determination to put in place a clear national strategy that will support the work of Racial Justice and enable our dioceses and parishes to be involved, and to build capacity.

Our desire is nothing less than to ensure and to share with the world the fullness of what is opened up to us in Jesus Christ as a redeemed humanity –  this work is so important and it is why becoming a diverse Church, as one of our stated objectives, flows directly from what it means to be a Church that is in Christ.

Therefore of course, we do not do this alone. It is for every diocese and every parish and every congregation to be involved and to see this as a gospel imperative. Of course, there will be decisions, strategies, policies and structural changes. And hard decisions lie ahead. But as our inspirational and dedicated advisor, who we must pay tribute to her work, Sanjee Perera, often reminds us, it can only be achieved with love, and with the guidance of the Spirit, anchored in the gospel. It cannot be mandated. But it can be compelled by love, that love and that new humanity we see in Christ.

Companions, the work of racial justice is the work of the gospel. In Christ there can be nothing less.

So let me quote from the Kairos statement of 1985 written by black theologians in Soweto and still a challenge for the Church of England today – “For those Christians who find themselves on the side of the oppressor or sitting on the fence, the way forward is to cross over to the other side and to be united in faith and action”. It is now at last to this faith and action and delivery that the Church of England must now commit itself in love and for the sake of the gospel.

Synod, I move the motion standing in my name.