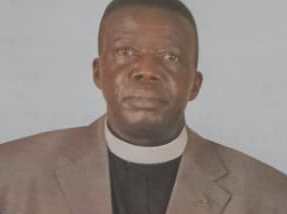 The Rev. Michael Okwii Esakahn has been elected the 2nd Bishop of Kumi Diocese. He will be consecrated and enthroned as Bishop on 6th March 2022 at St. Philip’s Cathedral, Ngora. The Rt. Rev. Thomas Irigei, the first Bishop of Kumi Diocese, retired at the end of 2019 when he reached the Church’s mandatory retirement age of 65.

Rev. Okwii was born 10th February 1965 into a Roman Catholic family in Atoot, Ngora District, Teso. His baptism and confirmation records in the Roman Catholic Church were destroyed during the insurgency. In spite of fearing the reaction of his father, he got saved on 3rd June 1986 in a fellowship studying Isaiah 1:18, “Come now, let us reason together, says the Lord. Though your sins are like scarlet, they shall be as white as snow; though they are red as crimson, they shall be like wool.” Okwii says, “I knew my dirty life and never thought God would forgive me, if I repented, put things right with other people and fight against the world, the flesh, and the devil.”

Rev. Okwii received a Post-Graduate Diploma in Management from the Uganda Management Institute in 2003. He earned a Master of Arts in Applied Theology from Trinity College, Bristol, UK, and a Bachelor Divinity and Diploma in Theology from Bishop Tucker School Theological College (now Uganda Christian University).

Rev. Okwii was ordained a deacon in St. Peter’s Cathedral, Soroti, in 1990 and a priest in 1991. He has served in many capacities in the Church of Uganda, including as a parish priest and Cathedral Vicar. He is currently the Archdeacon of Soroti and parish priest of Asuret. He has been a lecturer at Uganda Christian University, Mukono, Director of the Mbale Campus of UCU, and Deputy Principal of St. Peter’s Theological College, Soroti.

Rev. Okwii is married to Christine Okwii Esakhan. The Lord has blessed them with six children, five of whom are still living, and one grandson.

The election was made by the House of Bishops of the Church of Uganda sitting at Lweza Training and Conference Centre on 9th February 2022.