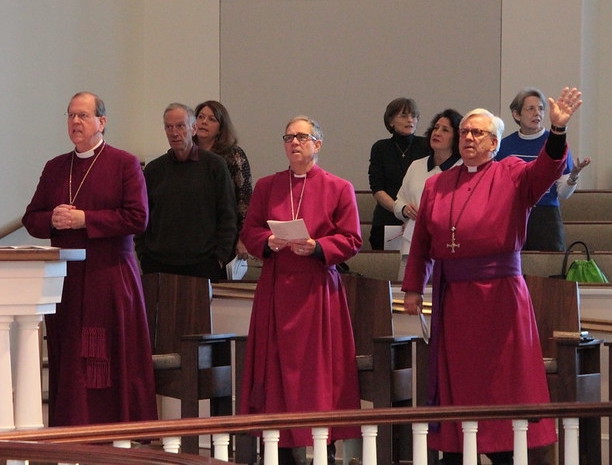 Anglicans Christians praying to uphold the sanctity of human life and for an end to abortion can be encouraged by recent legislative and judicial developments, but shouldn’t grow comfortable, according to a bishop of the Anglican Church in North America (ACNA).

“I’m comfortable with how close we are getting, if God so wills, to redirect and correct what was done in Roe v Wade,” shared Bishop Clark Lowenfield of the Houston, Texas-based Diocese of the Western Gulf Coast. “I learned a long time ago that I need to be wary when I become comfortable.”

Lowenfield was joined by Bishops Steven Tighe (Diocese of the Southwest), John Guernsey (Diocese of the Mid-Atlantic) and Deacon Georgette Forney of Anglicans for Life who also spoke and led prayers at the January 21 service held at The Falls Church Anglican in Falls Church, Virginia outside of Washington, D.C. Following the service, participants loaded onto three buses that took them to the National March for Life in Washington.

“If you want a religion to make you feel comfortable, I certainly don’t recommend Christianity,” Lowenfield said. “Inherently, I think the Christian life is supposed to make you uncomfortable.”

The Texas bishop stated that the default of American culture “is that every day we are to be comfortable, happy. We often lose touch with reality that the discomfort the Christian faith calls us to must be for someone else.”

Lowenfield voiced gratitude for Forney’s efforts transitioning the Anglicans for Life ministry from “not just anti-abortion” and into wider ministry around the sanctity of human life from conception until natural death.

In asking what participants’ response would be if Roe is overturned, Lowenfield sought to root the group in the importance of “learning God’s purpose for your life.”

“It’s not about you. It’s about God. It’s about his Gospel movement in this world. It’s about his son Jesus and his Holy Spirit now working among us,” Lowenfield summarized, proposing that abortion is a failure of Christian discipleship.

“The Christian Church, if discipled, would never put up with something like abortion,” Lowenfield insisted. “For us, maybe as you march today, and maybe as you contemplate what a post-Roe v Wade world might be, are you prepared to not look for the next cause, but rather are you prepared to ask God ‘what do you want me to do in discipling someone else?’”

In reading Psalm 139, regularly quoted in the Pro-Life movement for the verse “For you formed my inward parts; you knitted me together in my mother’s womb,” Lowenfield asked: “do you believe it? and why? You have been taught to believe God’s word — someone taught you. No matter what purpose you have in the years ahead, you must teach someone you love that this is God’s word, and you must believe it, and you must live by it.”

The prayer service followed a January 20 youth summit and preceded Summit 2022, a day-long conference on January 22 co-hosted by Anglicans for Life and the Diocese of the Mid-Atlantic. The annual summit includes presentations that seek to equip local churches to not only oppose abortion, but also support pregnant mothers and their children, oppose euthanasia, and witness for the sanctity of human life within the communities that they minister among.

Lowenfield spoke as Pro-Life activists believe they have seen greater legislative and judicial momentum in the past year. A novel Texas law banning abortions after the detection of a fetal heartbeat has effectively halved the number of abortions performed in the second largest U.S. state since it took effect in 2021. The decision of the U.S. Supreme Court to permit the Texas law to remain in effect pending legal challenges in lower courts has given Pro-Life Americans encouragement that a separate case, a 15-week abortion ban in Mississippi, will potentially be upheld. Such a ruling would chip away at – or overturning outright – the court’s 1973 Roe v Wade decision that invalidated state-level abortion restrictions.

During the service, participants heard from Priscilla Anne Hurley speaking by video from Alaska. Hurley shared about her past as an abortion clinic worker who had herself undergone two surgical abortion procedures. Convicted that what she had assisted in facilitating was wrong, Hurley shared of confession, repentance, and healing that she experienced through a retreat hosted by And Then There Were None, an outreach to abortion clinic workers seeking to depart the industry.

“The Devil wants us to focus upon our emotions, Jesus wants us to focus upon the truth of his word,” Hurley told the group. Quoting deaf and blind disability rights advocate Helen Keller, Hurley stated, “If the blind put their hands in God’s, they find their way more surely than those who see but have not faith or purpose.”

The entire worship service is viewable below via the Anglicans for Life YouTube channel.