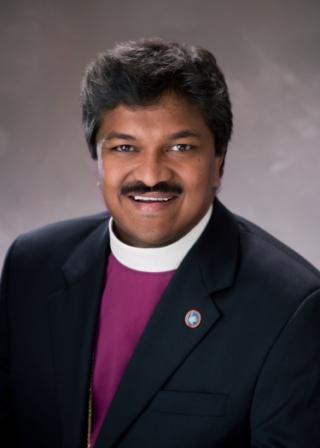 Bishop Prince Singh was welcomed this month by the dioceses of Eastern Michigan and Western Michigan, where he began serving as bishop provisional several months after he announced he would step down from his previous role leading the Diocese of Rochester in New York.

“I am delighted to be in Michigan with you,” Singh said in a Feb. 3 video message to the partner dioceses. He said has moved to a home in Stanwood, about an hour north of Grand Rapids and an hour west of Saginaw.

Singh acknowledged that the pandemic, now approaching two years, has left many people weary of restrictions on daily life and the need for public health precautions, including at churches. “I want to just thank you for your patience,” he said. “Let’s move forward with grace with dignity and not give in to the vitriol around us in our culture, so that we may be contributors to light – and not, so much, the heat.”

Singh stepped down as bishop of Rochester effective Feb. 2 after 14 years. In his announcement of the decision in September 2021, he did not elaborate on his reasons for leaving Rochester but said he was doing so “with a whole heart and a good portion of sadness.”

Months earlier, in May 2021, a fire destroyed Singh’s home in the suburban town of Perinton, New York. The bishop escaped safely after discovering flames in his garage.

His path to the two Michigan dioceses followed upheaval in those dioceses’ leadership, culminating in the June 2021 resignation of Bishop Whayne Hougland.

Hougland had served as Western Michigan bishop since 2013 and was elected bishop provisional of Eastern Michigan in October 2019 under a new partnership between the two dioceses that included sharing a bishop. In June 2020, the two dioceses’ standing committees announced Hougland had acknowledged making “serious mistakes” in pursuing an extramarital affair. The other person involved in the affair was not an Episcopalian, nor a member of the staff of either diocese, and no state or federal laws were broken, according to the dioceses.

Hougland reached an agreement with Presiding Bishop Michael Curry to serve a one-year suspension, after which the dioceses announced he would resign rather than return to his previous leadership role.

The Rt. Rev. Skip Adams, a retired bishop of Central New York, served the two dioceses as assisting bishop during the transition, and in October, the dioceses announced the nomination of Singh as bishop provisional. He was elected at the diocesan conventions later that month. The Rt. Rev. Stephen T. Lane, retired bishop of Maine, is now serving as provisional bishop in Rochester. https://www.episcopalrochester.org/staff

“Bishop Singh comes to us with energy and enthusiasm for the work we have to do together as dioceses,” the standing committees said in announcing Singh’s nomination. He agreed to serve as a full-time bishop provisional for three to five years, during which the dioceses will continue discerning the future of their partnership and its leadership.

“I’m here in Michigan and I just wanted to say how excited I am to be a part of this journey with you,” Singh said in a Feb. 1 video on Facebook. I look forward to meeting with you sometime soon.

Singh made his first congregational visit on Feb. 6 at St. Christopher’s Episcopal Church in Grand Blanc. A livestreamed evensong to welcome Singh is planned for 7 p.m. Eastern on Feb. 24.