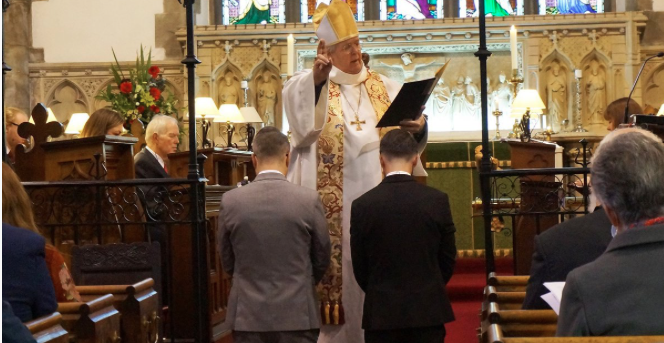 More than a hundred people celebrated the blessing of a same-sex couple in the Church in Wales on Saturday.

The Bishop of St Asaph conducted what is thought to have been the first blessing after the Church in Wales’ Governing body passed legislation to approve a new liturgy at its meeting in September.

Father Lee Taylor, priest-in-charge of Llangollen and his partner, Fabiano Da Silva Duarte, had their relationship blessed in a service in St Collen’s Church in the town.

Lee and Fabiano, who met in London in 2007, entered into a civil partnership in 2008 but only now have they been able to have their relationship blessed by the church.

Father Lee said, “The service was extremely special.  It was an opportunity to celebrate our love and union in the presence of God. It is exciting – a time to rejoice. I hope this is the next step towards the Church in Wales allowing same-sex marriage in church. That would be my hope.”

Speaking during the service, the Rt Revd Gregory Cameron said, “Lee and Fabiano’s relationship has already received God’s blessing. We can see that in their lives together. Today is about affirming as a Church their relationship, and an opportunity to pray for continuing blessing on their lives. This is an important moment of stepping forward as the church.”

Bishop Gregory added, “Passing the legislation in September was a big milestone because it represented the first time in the Church in Wales when we said that same-sex relationships could be blessed.  This weekend was significant because it was a step towards living out that new opportunity, and affirming two people who have lived the fruits of faithful love for over a decade, but been excluded yet from seeking the public affirmation of God and the Church.

“As such the service was a landmark, and one in which I rejoice. For too long the Church has expected LGBT+ folk to be discreet or even dishonest about their committed loving partnerships and marriages, and for me, to be able to celebrate Lee and Fabiano’s life-giving relationship in a public way was liberating, even if it is not yet full equality of marriage.”

The service included prayers, a Bible reading and a poem, which were interspersed with hymns and music from the church’s own resident choir and the Lleisiau’r Afon Ladies’ Choir.

Afterwards, there was a reception in the community hall next door to the church.