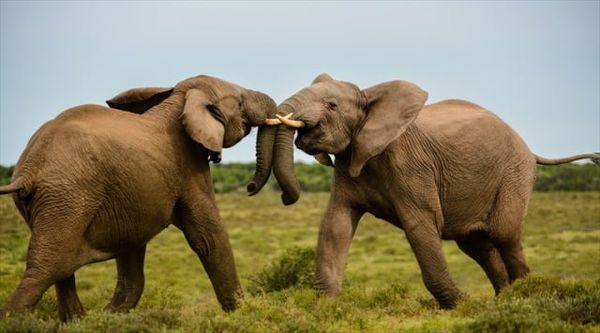 As the popular saying goes, when elephants fight it is the grass that suffers.

A high stakes fight-to-the-finish turf war has erupted between CSI Moderator Dharmaraj Rasalam and Madras Diocese Bishop George Stephen which will likely cost ordinary CSI members crores of rupees in legal fees. Both sides have employed some of the most well known and expensive senior counsels in Chennai. Bishop Stephen even has one senior counsel representing him as bishop and another representing the diocese, which he heads, in the same court battle! All paid for by the church, of course.

An out-of-turn hearing of a division bench of the Madras High Court on 26th August, held at the “urgent” request of Bishop Stephen’s senior counsel V.P. Raman, effectively stayed the CSI Synod headed by Rasalam from taking coercive action against the Bishop till August 31st. This is when the bench is slated to hear an appeal by the Bishop against a single judge order of the same court which effectively upheld the decision of the Synod to appoint a Commission of Enquiry to probe complaints of serious diocesan election irregularities largely against the Bishop himself.

Not wasting any time after the August 25th order of the single judge bench, the Moderator convened an emergency meeting of the Synod Executive Committee the very next day. How could he give proper notice to the over 100-member-strong Synod Executive for a meeting to be held in less than 24 hours you ask? Well an enabling omnibus resolution passed at the triennial Synod session in January 2020, hours after Rasalam was elected Moderator (Bishop Stephen had also contested for the post but lost). equips Officers of the Synod to take emergency decisions and have it ratified later by the Synod Executive, a nakedly dictatorial resolution. The Moderator’s emergency meeting on August 26th had a single point agenda to discuss the court order and initiate disciplinary action (most likely suspension) against Bishop Stephen while appointing an Administrative Committee headed by another bishop to govern the diocese. Suspension of bishops by the Synod is rare not because their deeds don’t deserve it but because the bishops of the CSI maintain, like the mafia, omerta or the code of silence on each other’s crimes. In 2012 Bishop Kanaka Prasad of Medak was suspended (which became permanent removal) allegedly for misusing his power of attorney but basically because he had a falling out with the Synod. Bishop Stephen has however, through the August 26th court intervention, outsmarted the Moderator and avoided that fate for now.

To save our readers time in navigating what is a complicated turf battle here is the gist of it. Elections to the Madras Diocesan Council were due in January 2021 but got delayed due to Covid. Amid growing clamour from Bishop Stephen’s detractors for the Synod to appoint an Administrative Committee to run the diocese, he went ahead with holding the council session simultaneously in five different venues (to get around Covid restrictions on numbers) in Chennai in mid April. Several complaints soon followed to the Synod as to the conduct of the elections including on lack of proper roll call, too many members nominated by the bishop packing diocesan committees, fake votes being cast, improper election of the Treasurer, etc. In early May the Synod forwarded the complaints to the bishop seeking his response. Rather than explain, Bishop Stephen cocked a snook at the Synod. He effectively told CSI’s supreme body to mind its own business saying it was a diocesan matter and under the diocesan constitution it was a Diocesan Election Commission that the complaints should be addressed to. The Synod fired back appointing a two member Commission of Enquiry headed by the Deputy Moderator to investigate the complaints and ordering the Bishop not to make any ministerial transfers in the interim. Stung by this action, Bishop Stephen moved the Madras High Court and got a temporary stay against the Synod which was vacated on August 25th along with the order delivered by Justice V. Parthiban.

In his 128 page order, Justice Parthiban examined in great detail the CSI and Madras diocesan constitutions and held that since the election related complaints were largely against the bishop himself, referring the dispute to a Diocesan Election Commission will not provide justice. Not only had the bishop nominated 50% of the members of the Commission, in violation of nomination norms, but unlike other disputes relating to discipline of the church that could be referred to the Synod for final adjudication, there is no constitutional provision, the judge noted, to appeal a decision of the Diocesan Election Commission to the Synod. It appears highly unlikely this matter will be resolved at the division bench of the Madras High Court and it seems set to be headed to the Supreme Court. This means that lakhs of rupees of church money will continue to be wasted on expensive lawyers in the weeks and months ahead.

This turf war between Moderator Rasalam and Bishop Stephen is yet another sorry chapter in the complete breakdown of governance across most dioceses of the CSI and the Synod. Both men in fact are guilty of gross malpractices in their own respective dioceses (the moderator is also the Bishop of South Kerala diocese) as we have detailed in our earlier posts. As the CSI enters the 75th year of its formation next month, the one common prayer of the faithful should be for God to intervene soon and set his people free from the evil being perpetuated by these modern-day pharaohs.+