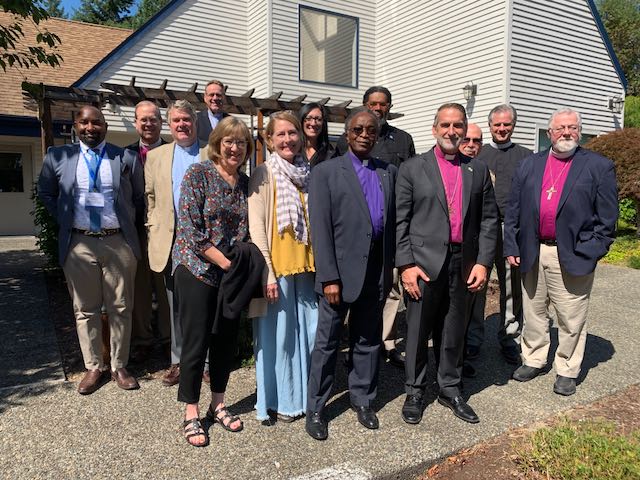 The Executive Committee of the Anglican Church in North America met Tuesday 24, 2021, in Bremerton, Washington, just outside of Seattle.  They were hosted by representatives of the Diocese of Cascadia including Bishop Kevin Allen, Dean Chris Recinella, and volunteers and staff of St. Charles Anglican Cathedral. The Executive Committee devoted time to prayer for those suffering in the crises in Afghanistan, Haiti and Myanmar, and from the flooding in Tennessee, and noted the work of the Anglican Relief and Development Fund in responding with aid to those affected.

Bishop Allen shared an update from the Anglican 2030 Task Force Report which is engaging members from around the province in a series of conversations to help shape the next decade of mission and ministry in the Anglican Church in North America.  The Steering Committee to lead the project is Archbishop Foley Beach, Bishop Kevin Bond Allen, Bishop-elect Alan Hawkins, the Rev. Canon Phil Ashey,  Mr. Albert Thompson, Dr. Joan Deeks, Mrs. Deborah Tepley, the Rev. Jessica Jones, and the Rev. Chris Recinella.

Allen reported, “We had our first working meeting here at St. Charles yesterday which included sharing our hopes and dreams for the Anglican Church in North America and beginning to identify areas for growth and improvement. We discussed how to involve laity, clergy, and bishops in a conciliar manner in this process as well as including initiatives leaders.

The Steering Committee will begin a series of Zoom meetings to refine our process, set benchmarks for engaging and reporting progress, set direction for each of the sections, recruit and appoint co-leaders for each section, and prepare work to share with the College of Bishops this coming January.  The goal is for this work to culminate in a presentation to the Provincial Assembly 2024.


Prevention and Response to Misconduct Against Adults Task Force Forming

The Rev. Bill Krizner of the Gulf Atlantic Diocese was selected to chair a task force which will address the topic of prevention and response to misconduct against adults.  Paralleling the excellent work of the recent task force for the Safeguarding of Children, this team will develop a sample policy to aid dioceses in evaluating and strengthening their own policies and resources.

Collectively, the members of the team have extensive experience in working with survivors and handling the multifaceted and sensitive matters pertaining to allegations of misconduct.

Learn more about the members of the Provincial Response Team at: https://anglicanchurch.net/provincial-response-team/#faq Please keep this team in your prayers as they undertake this important work.

The Executive Committee approved the addition of Mrs. Patty Hall to serve on the Finance Committee. Since the mid-1980s, Hall has served in Anglican churches in Virginia and North Carolina, both as a volunteer and, at times, as a paid staff member.  Her experience ranges from serving as an Assistant Treasurer at The Falls Church, one of the largest congregations in the Anglican Church in North America, to helping in the planting of three churches, serving on the finance team of the Diocese of Christ Our Hope, and most recently working as the Director of Accounting for a mission organization, Anglican Frontier Missions.

Hall commented on the appointment: “My husband, Geoff, and I love planting churches. Serving on the Finance Team is another opportunity to contribute to the success of church plants and the growth of the Anglican Church in North America.”


O Lord our heavenly Father, whose blessed Son came not to be served, but to serve: We ask you to bless all who, following in his steps, give themselves to the service of others; endue them with wisdom, patience, and courage, that they may strengthen the weak and raise up those who fall, and, being inspired by your love, may worthily minister to the suffering, the friendless, and the needy; for the sake of him who laid down his life for us, your Son our Savior Jesus Christ. Amen.