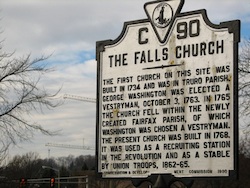 A once-leading orthodox Episcopal parish has called a man in a same-sex marriage as its new rector.

The Falls Church Episcopal in Falls Church, Virginia outside of Washington, DC announced May 11 that the historic parish will welcome Fr. Walter Burley Stattmann “Burl” Salmon as its new rector in July. He is married to another man.

Salmon currently serves as Associate for Pastoral Care, Christian Education, and Outreach at the affluent Bethesda-by-the-Sea Episcopal Church in Palm Beach, Florida, where he also served as priest-in-charge during a rector’s sabbatical. The Florida parish famously hosted the wedding of Former President Donald Trump and his wife Melania in 2005. Trump’s youngest son, Barron, was baptized at the church according to the Palm Beach Post and the First Family attended Christmas Eve and Easter services at the church in 2016, 2017, and 2019.

“Father Burl is an inspiring and transcendent preacher, an academic who can translate scripture to the present day, a careful and patient listener, and a compassionate and thoughtful manager who will ensure The Falls Church’s continued growth,” introduced Senior Warden Paul Rosbolt in a written announcement to the parish. “Father Burl will come to the Rectory with his husband Bob Henkel, who is Director of Publications for the American Society of Nephrology. They will be joined in the Rectory by Blue, an occasionally affectionate ragdoll cat.”

The church, established in 1732, famously split in late 2006 after more than 90 percent of members voted to depart the Episcopal Diocese of Virginia, citing theological disagreements with the Episcopal Church. It had been the largest congregation measured by weekly attendance in the diocese and counted U.S. President George Washington among its past vestry members.

A congregation remaining within the Episcopal Church reorganized at a neighboring Presbyterian church in 2007 and assumed occupancy of the historic church campus in 2012 after a Virginia district court awarded ownership to the Episcopal Diocese of Virginia. The Falls Church Anglican worships at a newly constructed church building one mile away from the historic church.

The pre-split Falls Church was prominent in opposing the consecration of Gene Robinson as Bishop of the Episcopal Diocese of New Hampshire in 2003. Robinson was the first openly partnered gay man to be elected and consecrated a bishop in the Episcopal Church and worldwide Anglican Communion. Robinson’s election by the New Hampshire Diocese and subsequent consent process by the denomination’s House of Bishops escalated an ongoing fight around the authority of scripture within the worldwide family of churches descended from the Church of England. The Episcopal Church has since elected several officials in same-sex marriages, including the bishops of Maine, Michigan and Missouri.

The denomination’s General Convention first provisionally authorized church rites for same-sex unions in 2012, formally enacting them in 2015 and eventually requiring dioceses to make those rites accessible in 2018. The last action resulted in Bishop William Love of the Episcopal Diocese of Albany being charged and found guilty of failing to abide “by the Discipline and Worship of The Episcopal Church” in declining to permit his clergy to perform same-sex marriage rites. Love resigned February 1 under an agreement negotiated with Presiding Bishop Michael Curry. He was received into the Anglican Church in North America in April.

Falls Church Episcopalians quickly took a different path than the Anglican congregation. In December 2012, the Episcopal Diocese of Virginia ordained its first openly homosexual candidate to the priesthood in a ceremony at the Falls Church campus. The church also hosted a same-sex blessing ceremony in 2014. The congregation elected a laywoman in a same-sex marriage to serve on the parish vestry, later as a warden. In 2020, the congregation welcomed its first priest in a same-sex marriage to serve as Associate Rector.