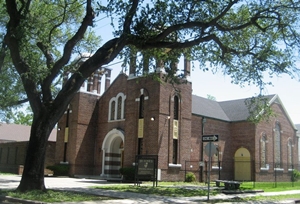 According to documents filed in Federal Court, the defendant was elected Senior Warden of St. Luke’s Episcopal Church (“St. Luke’s”) located at 1222 North Dorgenois Street in New Orleans. In his role as Senior Warden, WILLIAMS was responsible for paying all of St. Luke’s bills including insurance, salaries, and utilities.  WILLIAMS took over the finances of the church and reduced or eliminated other church members’ access to church finances shortly after becoming the Senior Warden at St. Luke’s. During his tenure, WILLIAMS embezzled approximately $89,000 from St. Luke’s in his capacity as Senior Warden. WILLIAMS did not share church bank statements with other church members in an effort to conceal his embezzlement of church funds and he transferred church funds from one bank account to another account before withdrawing the funds.   WILLIAMS deposited much of the money into his various Chase accounts and used some of the stolen money to support his pizza restaurant located in the Esplanade Mall.

On August 29, 2018, FBI special agents interviewed WILLIAMS. During the interview, WILLIAMS made three false statements to the FBI agents. Specifically, WILLIAMS said he used cash withdrawn from a St. Luke’s account to fund a $2,500 Chase cashier check dated February 21, 2018, with Remitter: St. Luke’s Episcopal Church/Operating Account. When the agents specifically asked whether bank records would show the money for the cashier’s check came from a St. Luke’s account, he denied that bank records would show the $2,500 coming from the church account. Further, he told the agents that the $2,500 had come from his personal account. The statements were false because WILLIAMS knew that on February 21, 2018, he had withdrawn $2,900. from St. Luke’s operating account and then used $2,500 of those funds to purchase the above described cashier’s check made payable to the Esplanade Mall for the benefit of his pizza restaurant.  WILLIAMS also lied to the agents when he told them he had invested St. Luke’s money with a particular company. Lastly, he lied when he claimed he had not used any of St. Luke’s money for his business or for personal use. The FBI’s investigation determined that all of these assertions were in fact false.

U.S. District Judge Lance M. Africk sentenced WILLIAMS to 12 months and 1-day imprisonment, followed by 2 years of supervised release and payment of a $100 special assessment fee.  WILLIAMS was also ordered to pay restitution in the amount of $89,000.

The U.S. Attorney’s Office would also like to acknowledge the assistance of the Federal Bureau of Investigation. The prosecution of this case is being handled by Assistant U.S. Attorney Brian M. Klebba, Chief of the Financial Crimes Unit.