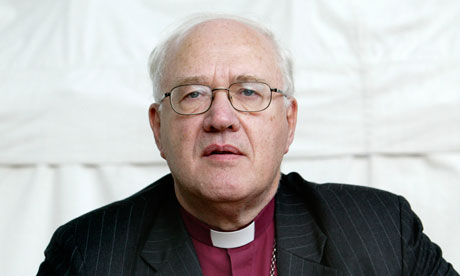 George Carey, Archbishop of Canterbury from 1991 to 2002, has made a significant intervention in the campaign to redress one of the nastiest things any organisation in 21st Century Britain has done to its workforce – the Clergy Discipline Measure (2003).

Writing in Saturday’s Daily Telegraph, Carey described his experience of having his Permission to Officiate removed:

‘Last June I was brutally told that after 58 years of serving the church faithfully my ministry was withdrawn because of some kind of association, of which I had no knowledge, with John Smyth QC. Smyth was a lawyer who savagely beat young Christian boys from top public schools until they bled…I had no memory of him. He apparently came to Trinity Theological College in Bristol in 1983, where I was principal, to pursue a sabbatical term or two of independent study. I have only been able to find one member of staff who remembered him.’

After an investigation by a ‘core group’ within the Church of England’s National Safeguarding Team, Carey’s PTO was reinstated last month. The NST ruled that he posed no safeguarding risk, allowing the Bishop of Oxford, Steven Croft, to remove the ban on the 85-year-old Carey helping out his local vicar in the town where he lives. It is to Croft’s credit that he has allowed Carey, on the Oxford diocesan website, to express his dissent from the NST’s view that he had known of Smyth’s ‘evil conduct’ in the 1980s and to restore his PTO as soon as he could.

But Carey’s description of the disciplinary process he experienced resonates for many clergy hit by CDM complaints: ‘An investigation took place under the auspices of a secretive and anonymous body, called a core group, which concluded that on the basis of a vague reference in a letter between two evangelical clergymen, who themselves knew about Smyth’s abuses, that details had been passed to me…

‘If I had seen the “memo” listing Smyth’s terrible deeds it would have been seared on my memory. But the investigator and the core group took no note of my protestations, nor of the testimony of a senior member of staff at the college who gave clear evidence as to why I could not have known…

‘This matters because I am not the only one experiencing these unjust measures. Last year, it was reported that many clergy were left feeling suicidal by the way they were treated during the Church of England’s disciplinary processes.’

The CofE announced last December that it plans to replace, not revise, the CDM. For many conscientious CofE frontline clergy living in fear of a complaint against them under the extraordinarily low threshold set by the CDM, this cannot come too soon.

Living where they work, parish clergy interact regularly with a wide range of individuals in their churches and local communities. The facility with which disgruntled parishioners can lodge complaints against their ministers under the CDM, subjecting them to a drawn-out process under which they are expected to raise the money for their own legal expenses, is scandalous. No decent secular employer in a democratic society allows its workforce to be treated in this way.

The CDM process reeks of neo-Marxist power playing. Archdeacons can very easily bring CDM complaints against frontline clergy, which diocesan registrars then pass onto the Bishop for an adjudication. Unfortunately, some bishops and archdeacons are not morally fit for the power the CDM gives them and have been known to threaten clergy with discipline over trivial matters or even over their ‘tone’ in theological and moral disagreements.

Anti-bullying campaigner, Kate Andreyev, has described her vicar husband’s experience when he was subjected to the CDM process in 2017/18: ‘When my husband faced a CDM with false accusations, we were told by both Bishop Rod Thomas {conservative evangelical Bishop of Maidstone} & our lawyer (also a diocesan registrar) that the CDM was “political” & would have nothing to do with justice. We found this to be true.’

Carey’s experience of ‘the stutteringly slow, brutal and impersonal face of the Church of England’s core group process’ reveals the illogicality of the CofE’s approach to clerical discipline.  If Carey were lying over his knowledge of the Smyth scandal, why reinstate his PTO? Surely truthfulness is an essential requirement in a minister? But in its bureaucratically obtuse refusal to take Carey at his word the NST is apparently willing to let that requirement pass.

Thankfully, Carey’s Christian commitment to tell the truth about his experience is adding fuel to the bonfire on which the CDM needs urgently to be thrown.

Admitting his part in past failures to deal properly with clerical abusers (Carey resigned as an honorary bishop in Oxford Diocese in 2017 over his part in the cover-up of the Peter Ball abuse scandal in the 1990s), Carey struck a note of prophetic authority in his Telegraph article:

‘This is not the Church of England that I have known – generous, open and kind. Tragically, I know that victims of clerical abuse found the Church of England in the past to be defensive and uncaring, and I greatly regret my part in that culture and those terrible attitudes. But it does not do to replace one failure with another. The current culture of fear in which survivors and clerics alike receive no kind of justice must be confronted.’