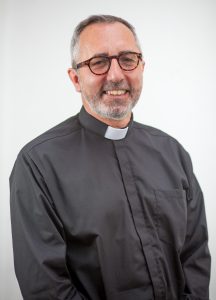 In a historic first online episcopal election, the Diocese of Argyll & The Isles has chosen a new Bishop.

The Rev Canon Dr Keith Riglin was selected by the Electoral Synod from a short-list of three candidates, and will fill the vacancy brought about by the translation of the Rt Rev Kevin Pearson to the Diocese of Glasgow & Galloway last year.

The successful outcome also means that the College of Bishops will now have a full complement of seven Bishops for the first time since 2016.

The Bishop-elect is Vice Dean and Chaplain at King’s College London, where he is also a Visiting Lecturer in the Department of Theology and Religious Studies. He also serves as Assistant Priest at St Anne’s Church, Soho and as an Authorised Presbyter at Wesley’s Chapel, London.

After his election, he said: “I am delighted and deeply touched to be elected as Bishop.

“This is such an important time for our communities and churches. I’m humbled by the confidence placed in me, and look forward to all that God may do.”

The Most Rev Mark Strange, Primus of the Scottish Episcopal Church, said: “I am delighted to welcome Rev Canon Keith Riglin to the College of Bishops. Keith has served the diocese of Argyll and The Isles as an encourager and enabler, bring fresh insights that has invigorated the clergy and congregations. May he be blessed in his new ministry.

“My thoughts and prayers are also with the two candidates who were not elected, the Very Rev Margi Campbell and the Rev David Railton. May their ministry continue to flourish as they follow the path of their vocation.”

Ordained in 1983, Canon Riglin has worked in university chaplaincies in Bath and Cambridge, as a Minister in Amersham, and as a lecturer at the United Theological College of the West Indies. After 25 years serving Baptist and Reformed charges, he received Holy Orders in the Church of England in 2008, serving his title in a Notting Hill parish and community development project. Prior to his appointment at King’s in 2012, he served briefly in the Diocese of Argyll and The Isles, where he has had Permission to Officiate since 2012. In March 2020 he was installed as an honorary Canon of St John’s Cathedral, Oban.

He read education and religious studies through the Institute of Education, London, and theology at Oxford, and undertook post-graduate work (MTh) at Heythrop College, London, and completed his ThD thesis, in ecclesiology, at the University of Birmingham. He is a Fellow of the Royal Society of Arts, an Associate of King’s College, and a Senior Member of Wolfson College, Cambridge. He is Chair of the All Saints Educational Trust, Deputy Chairman of the Council and Governing Body of Regent’s Park College, Oxford, and a Director of Ordinands in the Diocese of London.

Canon Riglin is a regular Tutor on the Oxford University Summer Programme in Theology and a frequent visitor to Ghana and the University of Cape Coast.

A long-standing member of the Methodist Sacramental Fellowship, he is particularly interested in ecclesiology and sacramental theology, and the application of theology and religious belief to public thought and practice.

He has two daughters, both graduates of UCL, and lives with his wife Canon Jennifer Smith, a Methodist presbyter and superintendent minister of Wesley’s Chapel, London. He enjoys cinema and contemporary dance, is a passionate fan of the music of the late Beatles member George Harrison, and has been a life-long fan of Doctor Who since watching the first ever episode in 1963, at the age of five.