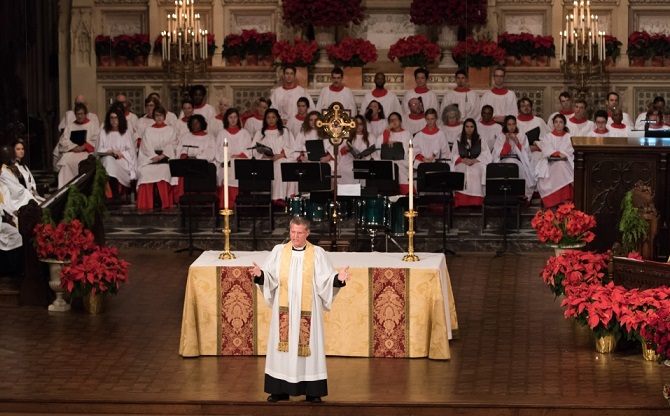 The top clergyman at one of the wealthiest parishes in the U.S.-based Episcopal Church has abruptly stepped down.

The Rev. Dr. William Lupfer, rector of Trinity Wall Street Episcopal Church since 2015, announced his departure in a January 3 brief letter to church staff, first published by The Living Church.

Such an abrupt departure is highly unusual. Stepping down over a holiday break with no announced transition to an interim rector (Lupfer will be succeeded by church vicar Phillip A. Jackson, who will become priest-in-charge) indicates the departure decision was sudden. As of the morning of January 6, Lupfer’s name and photo had already been removed from the Trinity staff page.

“I have come to the decision to step away for a time, resign as Rector of Trinity, and enjoy some sabbath rest,” Lupfer wrote, noting that it follows “five years of intensive work” with vestry and other stakeholders.

Trinity holds billions of dollars in property and financial assets, dating to an early 18th century grant of Manhattan farmland from Queen Anne. In February 2019, the New York Times reported that the parish portfolio was worth an estimated $6 billion.

While not especially large in membership, the parish holds an influential role in the worldwide Anglican Communion. According to its web site, internationally, Trinity Church provides grants to dioceses, provinces, and seminaries within the global family of churches descended from the Church of England. Among those grants are funds provided to Anglican provinces in Africa to support their participation in gatherings friendly to the more liberal Episcopal Church.

In March, the parish announced it was effectively purchasing the Church Divinity School of the Pacific, a seminary that prepares future clergy for service in the Episcopal Church.

Remarkably unchanged: Trinity Wall Street reports constant membership and attendance numbers for much of the past decade.

The parish largely lives off these assets, reporting no congregational plate-and-pledge income for the past four reporting years. Prior to that, the parish reported exactly $600,000 in annual plate-and pledge donations going back to 2010. Statistics made available by the Episcopal Church Office of the General Convention list an unchanged membership of 950 and attendance of 625 from 2011 onward. Streaming video of services appears to show an attendance closer to 200 persons.

Trinity’s vestry and clergy have had friction before, usually centered around financial management disagreements. The Christian Post reported that the previous rector, The Rev. Dr. James H. Cooper, announced a departure in 2013 following accusations against him “included misreporting of numbers of worshippers on Sunday services; demands for a $5.5 million SoHo townhouse; an allowance for his Florida condo and fat salary; trips around the world at church’s expense; wasting more than $1 million on development plans for a luxury condo tower; and spending $5 million on a publicity campaign.”

The church listed the Federal-style townhouse on the market in 2015 with an asking price of $12 million, according to the New York Post.

Almost uniquely among parishes, Trinity’s 22-member vestry has people not drawn from the congregation. Among them is Gabrielle E. Sulzberger, wife of New York Times publisher Arthur Ochs Sulzberger Jr. Only seven persons serving on the large vestry are listed as members of the parish.

According to a letter from the parish vestry provided by a spokesperson for the church, it will conduct a call process to select the next rector, “who will lead the church in its mission both as a local congregation and global parish.”