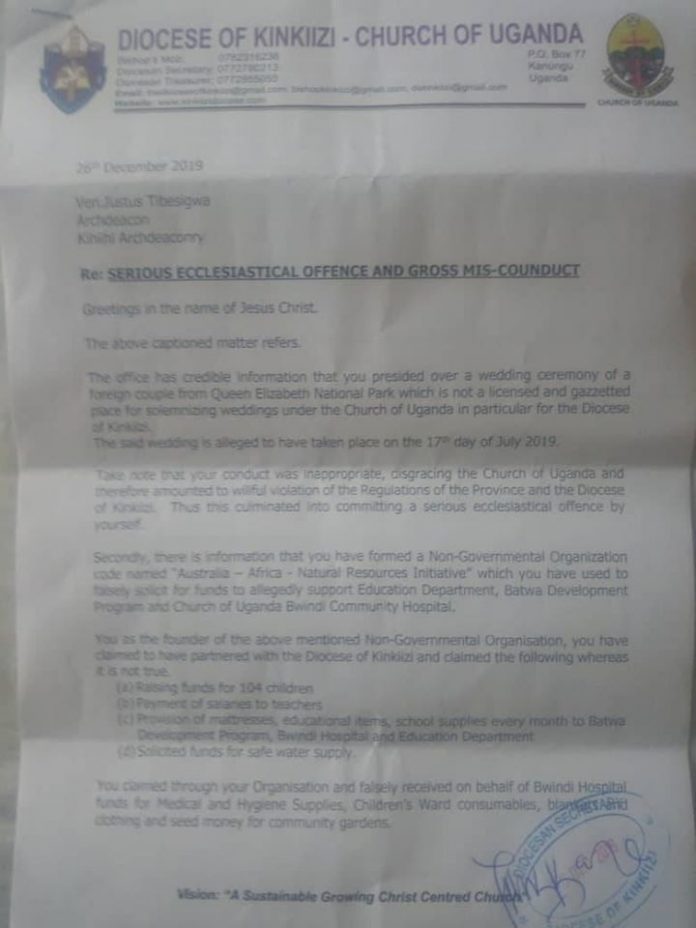 The Bishop of Kinkiizi in the Church of Uganda has suspended the archdeacon of Kihihi, the Ven. Justus Tibesigwa, accusing him of gross misconduct.

In a letter dated 26 Dec 2019 the diocesan secretary charged the Ven. Justus Tibesigwa had conducted a wedding for a foreign couple outside of church premises without the permission of the bishop, and that he had solicited funds from overseas donors but misappropriated the funds.

The charges follow November complaints lodged by lay members of the diocese against the Rt. Rev. Dan Zoreka, Bishop of Kinkiizi, accusing him of suborning perjury by having his aides bribe the archdeacon’s maid to say Archdeacon Tibesigwa was planning to poison the bishop.

The diocesan letter stated: “The office has credible information that you presided over a wedding of a foreign couple from Queen Elizabeth National Park which is not licensed and gazetted place tor sensitizing weddings under the Church of Uganda in particular for the diocese. The said wedding is alleged to have taken place on 17rh July 2019”.

The second count of misconduct alleged the archdeacon “formed a Non-Governmental Organisation code-named Australia-Africa-Natural Resources Initiative which you have used to falsely solicit funds to allegedly support Education department, Batwa Development program and Church of Uganda Bwinfi community hospital.”The archdeacon will be suspended from office and placed on half pay pending an investigation into the charges. On 10 Nov 2019 the Command 1 Post news website eported that aides of Bishop Zoreka had approached Archdeacon Tibesigwa’s maid and bribed her to claim falsely that her employer had poison in his home that was to be used to kill the bishop. However, when interrogated by police the maid admitted she had been paid to make the false claim. Command 1 Post reported the Kanungu Central Police are investigating the claim.