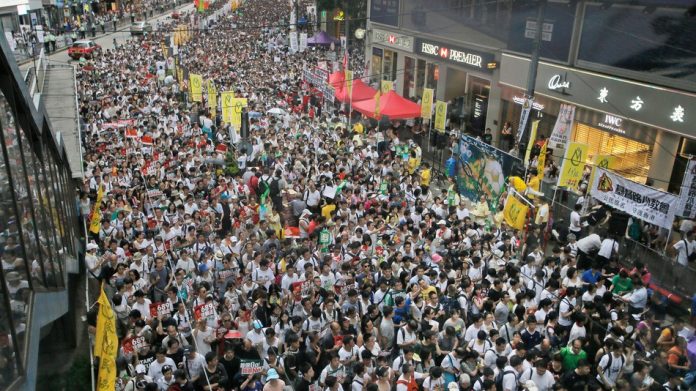 The proposed Fugitive Extradition Bill has caused division and a series of conflicts in the Hong Kong society in the last two months. The Church has expressed her love and care for the city in many ways. This week, the Revd Jonathan Chee shared with us with his experience on 5 August, when netizens called for a city-wide strike in Hong Kong. Dean Matthias Der, Dean Jeremiah Fan and the Revd Chan Kwok-Keung also responded to the current situation on behalf of their cathedrals.

Fr Chee wrote that All Saint’s Cathedral opened her doors as usual on 8:30 am on 5 August, the day when netizens called for a city-wide strike. Rallies were held at different districts in Hong Kong, and one of them was in Macpherson Playground, a spot close to the cathedral. On the same day, All Saints’ Cathedral held a Taize prayer at 11 am for young people to pray for God’s guidance.

Fr Chan wrote that the Holy Trinity Cathedral was opened as usual to offer a quiet place for bishop, clerics and parishioners on 17 August, when protestors held a march in Hung Hom, a district close to the cathedral. In the past two months, he said, the arguments surrounding the extradition bill exhausted the people of Hong Kong. The Lord said “in quietness and in trust shall be your strength”, and people must be reminded that they all have to calm down, Fr Chan added.

Not many people came to the cathedral that day. The staff hoped to play the role of the good Samaritan to provide water to the masses to offer them a moment of quietness and prayer at the cathedral.

“We have seen growing frustration, anger, sadness and anguish in people’s hearts on the future of our beloved home, but please do not lose hope.” Dean Der wrote in his piece. “The Christian hope is rooted in the transforming power of Jesus Christ who has overcome the power of darkness and delivered us to the new light of his Kingdom.”

During this troubling time, St John’s Cathedral has strived to be an open and sacred space for all people, for quiet reflection and for seeking peace and strength from God. The cathedral held evening prayers themed “Prayer for our city” on Thursday throughout August and September for parishioners to guard the city through silence, scripture and hymns.

Dean Fan wrote that while the crisis seems unlikely to be resolved in the foreseeable future, and dialogue and reconciliation are still far away, the Church could prepare for future reconciliation by sowing the seeds of love and peace.

In the past two months, conflicts have broken out between family members and church members due to different political views. Many people are under immense emotional stress. If the division persists, many more will become troubled. As a hospital for the spirit, the Church is willing to open her doors as a place that listens to all views, and a place where people can rest. This is also a witness to society.