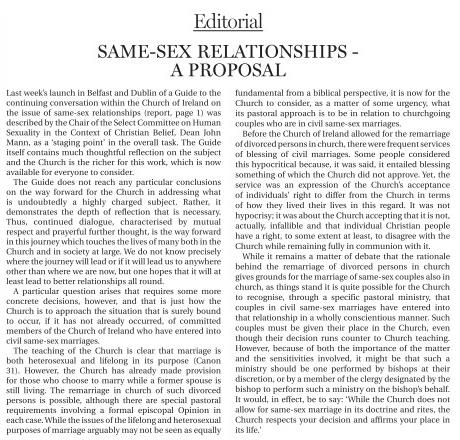 As the church’s teachings on divorce and remarriage had evolved over time, so too should it rethink gay marriage.

The Church of Ireland Gazette has called upon the Church of Ireland to repudiate the Anglican Communion’s teaching on marriage and create rites for the affirmation or blessing of same-sex marriages. In an editorial published last week, the independent church newspaper said the church needed to find a liturgical response to same-sex couples in the Republic of Ireland who had married or to couples who had entered into a same-sex civil partnership in Ulster. “The teaching of the Church is clear that marriage is both heterosexual and lifelong in its purpose (Canon 31),” the editorial said, but noted that as the church’s teachings on divorce and remarriage had evolved over time, so too should it rethink gay marriage. “It is now for the Church to consider, as a matter of some urgency, what its pastoral approach is to be in relation to churchgoing couples who are in civil same-sex marriages”. Drawing upon this analogy the Gazette argued:  “While it remains a matter of debate that the rationale behind the remarriage of divorced persons in church gives grounds for the marriage of same-sex couples also in church, as things stand it is quite possible for the Church to recognise, through a specific pastoral ministry, that couples in civil same-sex marriages have entered into that relationship in a wholly conscientious manner.” Married same-sex couples and those in civil partnerships “must be given their place in the Church, even though their decision runs counter to Church teaching.” This would tell married same-sex couples “While the Church does not allow for same-sex marriage in its doctrine and rites, the Church respects your decision and affirms your place in its life.”