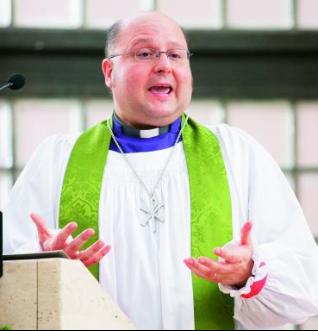 The Rt. Rev. Carlos Lopez Lozano, Bishop of the Spanish Reformed Episcopal Church, an extra-provincial diocese under the metropolitan authority of the Archbishop of Canterbury.

Bishop Lopez Lozano was born on 25 May 1962 in Madrid to a long established Protestant family. He was educated at Seminario Teologico Bautista Espanol in Alcobendas, Spain, and the the United Evangelical Theological Seminary (SEUT), and pursued graduate studies at the Pontifical University of Salamanca. He was ordained a minister for the Baptist Evangelical Union of Spain and in 1989 was ordained a priest of the Spanish Reformed Episcopal Church. He served as rector of the Iglesia del Redentor in Salamanca and rector of Iglesia del Espiritu Santo in Villaescusa in Cantabria. On 29 July 1995 he was elected Bishop of the IERE and consecrated by the Archbishop of Canterbury, the Most Rev. George Carey, on 5 November 1995.