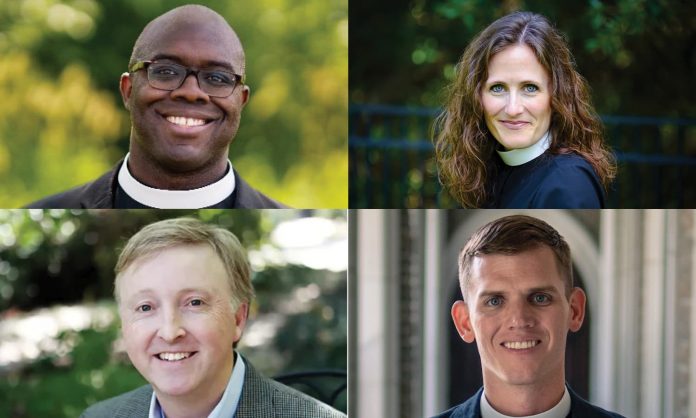 The Next Generation Leadership Initiative (NGLI) began at our Provincial Assembly 2019 in Plano, Texas, and the Rev. Canon Dr. Esau McCaulley has assisted in the establishment of this initiative for two years. While serving NGLI, Canon McCaulley has become a regular contributor to the New York Times and Christianity Today. He is currently professor of New Testament at Wheaton College and serves as a Canon Theologian for the Diocese of Churches for the Sake of Others.  Recently, Canon McCaulley has passed the baton of leadership to the Rev. Canon Dr. Jessica Jones of the Diocese of the Gulf Atlantic.

“It has been such an honor to help pioneer the Next Generation Leadership Initiative. We have launched this ministry, and it has been encouraging to see its early progress. Due to the amount of work at Wheaton and my writing and speaking, it will be more helpful to have a leader who can give so much more time to this work. I have full confidence that Canon Jessica Jones will do a great job creating a vision for the flourishing of the next generation of leaders in the Anglican Church in North America. She is a very committed and gifted leader in this province.  I plan on being involved in an advisory capacity on this ministry as well as other Anglican Church in North America task forces and committees.  It was a pleasure to serve the beginnings of NGLI.”

Canon Jessica Jones is the Associate Academic Dean and Thesis Director at the Webber Institute for Worship Studies as well as the Canon for Next Generation Discipleship in the Gulf Atlantic Diocese. As the daughter of two Anglican clergy, Jessica was raised in parish and diocesan ministry. She has served in a variety of positions, including as a Director of Family Ministry, Worship Director, Director for Christian Formation, and as an Executive Pastor. Jessica’s training has set her up to blend education, worship, and theology; she holds an undergraduate degree in Music Education, a Master’s Degree and a Specialist’s Degree in Educational Leadership, a Doctorate in Worship Studies, and will finish her Ph.D. in Educational Leadership in 2021. Jessica’s current area of study applies research on learning to the ways we teach in the church.

The Next Generation Leadership Initiative is raising up leaders for the next generation of the Anglican Church in North America. This vital initiative seeks to discover, develop, and deploy missional leaders across our province. Jessica concludes, “I am humbled and honored to utilize any experience I have to ensure ministry continues in our parishes and that our leaders are supported as they work diligently to bring those in their care into the unity of our faith.”

Lee Hilts has been appointed to serve as Treasurer for the Anglican Church in North America, following the term of Mr. Brad Root who faithfully served as Treasurer for six years. Lee is the outgoing Treasurer of the Diocese of Christ Our Hope having served as a volunteer staff member for the past five years. He currently is the Executive Director of Church of the Apostles in Raleigh, North Carolina. His family includes his wife, Sarah, and children, Andrew (19) and Jane (16). They have attended Church of the Apostles for sixteen years. Over that time, Lee has served on the vestry (including a role as Senior Lay leader), led children’s church, taught youth Sunday school, led a community group, and mentored college students and young adults. Prior to working at the church, he had a fifteen-year career in IT project management and telecommunications sales. Outside of work, you will find Lee playing board games, hiking, or playing disc golf.

Lee expresses his gratitude for the Church: “I am honored to serve the Lord and His Church in the role of treasurer. It is a privilege to witness His generosity firsthand and work alongside the Anglican Church in North America leadership as we see His Kingdom come, on earth as it is in heaven.”

The Rev. Canon Wesley Jagoe was recently temporarily appointed Canon and Chaplain to the Archbishop.  Canon Jagoe was raised in an Anglican household in Texas and Florida where he served in various capacities in parish, diocesan, and para-church ministry.  After graduating from the University of South Florida in 2007, Canon Jagoe was commissioned officer in the Marine Corps.  He left active duty for the Marine Reserves, where he continues to serve, to begin training for ordained ministry as a pastoral resident at The Falls Church Anglican in Virginia and at Trinity School for Ministry.  Most recently, he served as Canon for Worship at Saint Peter’s Anglican Cathedral in Tallahassee, Florida.  Canon Jagoe has a passion for the art of the liturgy and for travel.  He has traveled to over 63 countries, including military deployments to Afghanistan, Iraq, and aboard ship during the Libyan Civil War and Arab Spring.  Canon Jagoe resides in Greenville, South Carolina and is serving in this temporary capacity while Canon Lawrence McElrath is deployed as an Army Chaplain for the United States Military. Canon McElrath will return to his post in early summer of 2021.

Bishop of the Northeastern Caribbean and Aruba elected

Gangsterism and the Church of England

Conservative evangelicals not sanguine about the prospects for a new Bishop...