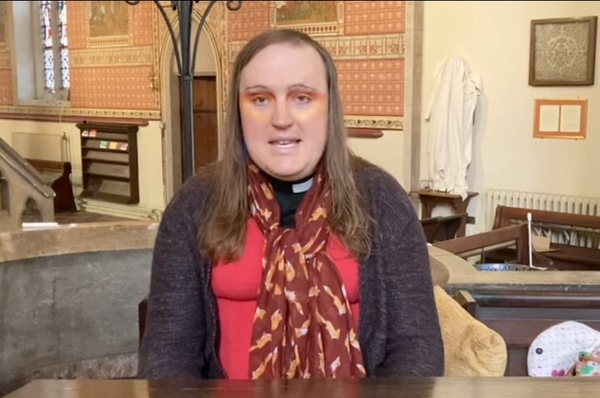 The Bible is pretty darn clear: God created two human sexes, labeling them as male and female. “Male and female He created them” (Genesis 1:27). One would expect that a vicar of a Christian church grounded in Biblical scripture would accept God’s foundational creations, but Bingo Allison (yes, that’s his real name) knows better. The “gender-queer” vicar says that his epiphany came when he was reading Genesis, at which time he concluded that God intended sexual fluidity. No wonder Christianity is dying in England, even as Islam rises.

Bingo, a married father of three, is very proud of his imaginary sexual identity and is currently on a PR blitz. The Daily Mail article about Bingo (from which I quote in this post) is based on an interview Bingo did with BBC Radio Merseyside and an interview he did with the Liverpool Echo. This vicar also likes using social media to post pictures of himself along with captions saying that Jesus “loves sparkly eyeshadow,” something that I suspect would come as a great surprise to the Biblical Jesus as opposed to the leftist fantasy Jesus. Bingo also goes to schools and youth groups to spread the gospel of transgenderism.

Here’s Bingo’s video showing him spreading some of that gospel:

Surprisingly, having seen that travesty of a woman, complete with incipient male-pattern baldness and “man boobs” in action, I don’t feel closer to God. Do you?

If you’re wondering how Bingo gets away with this, it’s not because he’s hiding from the Church of England establishment. Instead, the CofE is totally on board. Bingo was halfway through the training program when he had his epiphany that, according to him, Genesis 1:27 spoke about something he calls “‘from maleness to femaleness’ as opposed to men and women.”

I wonder what Bible they’re using at the CofE training center because all the translations at Bible Hub are consistent. God created humans in his image, both male and female. A sane person understands that he created them as humans, as opposed to parakeets. I guess transgender vicars in the CofE think the language means that God is gender fluid so, despite God creating male and female, this vicar can emulate a gender-fluid God himself.

But it’s not just Bingo. As I noted, the CofE is totally on board, according to Bingo:

Read it all in The American Thinker