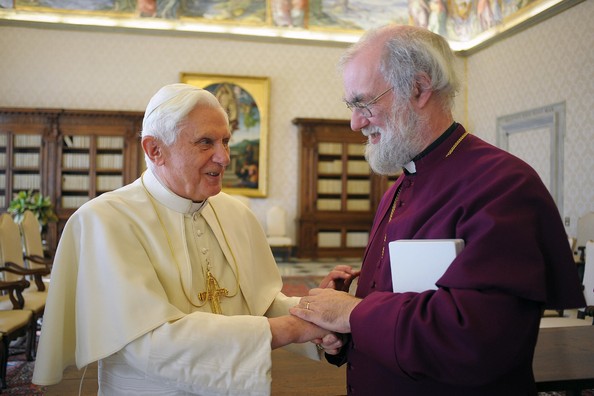 The Secretary General of the Anglican Communion, Bishop Anthony Poggo, has issued a statement following the death of Benedict XVI, expressing his “great sadness” and assuring brothers and sisters in the Roman Catholic Church of his prayers.

Bishop Anthony Poggo is currently returning to the UK from Tanzania after preaching the Christmas Day sermon Christ Church Cathedral in Stone Town, Zanzibar, Tanzania. Speaking at the airport, he said:

“It is with great sadness that I learn of the death of Pope Emeritus Benedict XVI.

With all the member churches of the Anglican Communion I would like to assure His Holiness Pope Francis, and all our sisters and brothers in the Roman Catholic Church of our prayers, thanking God for Pope Benedict’s outstanding ministry of service to the Church and the world.

“He was an inspiring and courageous teacher, preacher and pastor. His theological wisdom has been of immense benefit not only to Catholics, but to countless faithful in other Christian traditions.

“Anglicans are deeply grateful for the wisdom we have received from Pope Emeritus Benedict, and pray as he did that in Christ we shall all be one, and that together we will share in the fullness of the Resurrection.

“May he rest in peace and rise in glory.”

Archbishop Justin said: “Today I join with the church throughout the world, and especially with the Holy Father, Pope Francis, and all in the Catholic Church, in mourning the death of Pope Emeritus Benedict XVI.

“In Pope Benedict’s long life and ministry of service to Christ in His Church he saw many profound changes in the church and in the world. He lived through the Nazi regime in Germany and served briefly in the Second World War. As a younger theologian and priest he witnessed first-hand the discussions of the Second Vatican Council. As a professor and then as an Archbishop he lived in a divided Germany but saw too the fall of the Berlin Wall and the reunification of his homeland.

“Pope Benedict was one of the greatest theologians of his age – committed to the faith of the Church and stalwart in its defence. In all things, not least in his writing and his preaching, he looked to Jesus Christ, the image of the invisible God. It was abundantly clear that Christ was the root of his thought and the basis of his prayer.

“In 2013 Pope Benedict took the courageous and humble step to resign the papacy, the first Pope to do so since the fifteenth century. In making this choice freely he acknowledged the human frailty that affects us all. In his retirement in Rome he has led a life of prayer and now he has gone to the eternal rest granted by the Father. In his life and ministry Pope Benedict strove to direct people to Christ. May he now rest in Christ’s peace, and rise in glory with all the Saints.”