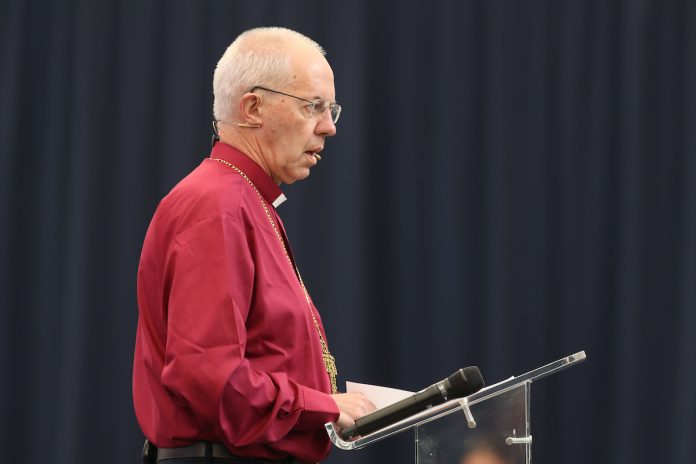 IF the Church of England moves towards blessing same sex marriage, or ‘opts into’ allowing gay marriages in its churches as a result of the church’s General Synod meeting in February 2023, “pain and distress will be felt by millions of faithful Anglicans across the globe”, and “significant questions would be asked as to whether Archbishop Justin Welby would be able to continue to lead the Anglican Communion.”

So says the Most Reverend Dr Mouneer Hanna Anis, Archbishop​ Emeritus of Egypt, a global Statesman within the Anglican Communion and an Adviser to the Primates of the Global South Fellowship of Anglican Churches (GSFA), whose Provinces represent 75% of Anglicans across the globe.

In an essay entitled ‘Are We Really A Communion?’, released on St Andrews Day (Nov30), the day the global Church celebrates Jesus calling his first disciple to deny self and follow Him, the Primate Emeritus says that any move in a ‘revisionist direction’ by the CofE would be a “deeply damaging unilateral decision”, by a Province “that is supposed to lead the Anglican Communion.”  Further, “it will contribute to the current divisions, and will badly affect the mission of other Provinces in the Global South.”

The 72-year-old says that he is “deeply saddened to say that the Anglican Communion we have loved, though it has kept its name, yet has lost its heart; which is the interdependence.” Adding thatsince the decision by The Episcopal Church (TEC) in America to consecrate the gay-partnered Gene Robinson as a bishop, Anglican Provinces have taken “unilateral decisions without consideration how it might harm the mission of other Provinces, or how it might cause divisions, or disruption of fraternal relations with other provinces.”

He explains: “None of us forget the appeal made by the Anglican Primates during their meeting in 2003 in regard to the consecration of Gene Robinson. We said ‘If his consecration proceeds, we recognise that we have reached a crucial and critical point in the life of the Anglican Communion and we have had to conclude that the future of the Communion itself will be put in jeopardy. …. This will tear the fabric of our Communion at its deepest level and may lead to further division….’”.

The global leader said the TEC unilateral decision greatly affected the ministry of Anglicans in the Middle East, and started wider division.  He explained: “When TEC ignored that appeal and went ahead, our mission here in Egypt, within the Islamic world, was badly affected. The Grand Imam of Al Azhar cancelled major meetings between the Anglican Communion and other faith groups, the Oriental Orthodox Family of Churches suspended ecumenical dialogue and as a minority church in the Middle East, we struggled in our ministry and witness because of the critical media reports which soiled our reputation. Many in our Church left as a result of TEC. We received harsh criticism in regional interfaith conferences. We were perceived as promoting immorality!”

He says that at the Communion level, several Provinces responded to the TEC unilateral decision by crossing the boundaries and creating bodies within the USA to provide oversight to orthodox Anglicans, bodies such as the Anglican Mission in America, GAFCON and the Anglican Church of North America.

During the last Lambeth Conference (July 2022), many bishops were unable to go against their consciences and receive Holy Communion alongside bishops from those revisionist Provinces which had introduced gay marriage. Hundreds of other bishops stayed away from the conference. “In view of all this,” Archbishop Mouneer said, “I ask myself: Can we still call it ‘The Anglican Communion’?

“As far back as the 1878 Lambeth Conference, the bishops of the Anglican Communion were keen to make its nature ‘autonomous and interdependent’. They declared ‘order and obedience, even at the sacrifice of personal preferences and tastes, lie at the foundation of Christian unity, and are even essential to the successful maintenance of the faith’.”

But the Archbishop says: “Without continued affirmation of interdependence between the Anglican Churches (Provinces), it would be difficult to call them a family of Churches, or a Communion.

“One may ask: why any change of doctrine of the CofE will have serious consequences on the Communion, unlike changes of doctrine of other Provinces? The answer is simple: it is because it is required of all Anglican Communion Provinces to be ‘in communion’ with the See of Canterbury. Therefore, any innovation in the faith and practice within the Church of England will heavily impact the rest of the communion, unlike innovations within other Provinces.”

He concludes his essay: “Such action would disqualify the CofE from leading the Anglican Communion, and Archbishop Welby would be contradicting the mind of the majority of Anglican provinces on its stated orthodox position on marriage and sexuality.

“If in February, the General Synod moves in a revisionist direction, a significant question global primates would ask would be whether Archbishop Justin would be able to lead the Anglican Communion, while his own Province goes against the mind of the majority of global Anglicans?”

This global intervention ahead of the CofE’s General Synod debate is the first of several facilitated by Anglican Orthodox, a new coalition of former archbishops and bishops, and current, serving clergy and laity in the CofE who uphold the biblical teaching on marriage. Anglican Orthodox will reveal its coalition partners, and overall objectives on a new website to be launched within the next 10 days (www.anglicanorthodox.uk).  In the meantime, to register interest and support, email Anglican Orthodox Convenor, the Revd Paul Eddy via convenor@anglicanorthodox.uk

For the full essay by Archbishop Mouneer, visit www.thegsfa.org.