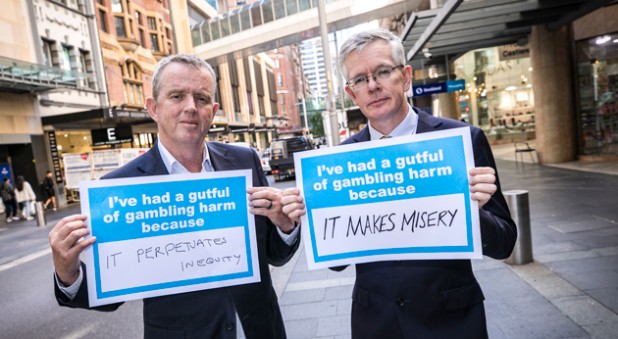 NSW has about double (or worse) the rate of poker machine losses compared to every other Australian state and territory. About 40 per cent of all pokies losses come from problem gamblers. Worse still, the highest losses are concentrated in Sydney’s poorest local government areas.

This is the stark reality that has led to the Dean of Sydney, Canon Sandy Grant, to team up with the Superintendent of Wesley Mission, the Rev Stu Cameron, to press for action by politicians in NSW. They want the Premier and Opposition Leader to form a ‘unity ticket’ for poker machine reform.

The push began with an impassioned plea from Dean Grant at the Anglican Synod this month. In moving a motion for a bipartisan approach to harm minimisation from poker machines, the Cathedral minister said he had been calling for this for “a dozen years”.

“I do this for the award-winning apprentice carpenter I knew,” the Dean told Synod. “[This man] always had work and we could never figure out why he couldn’t save any money, but it poured through the pokies at the pubs. I do this for the teacher with four kids at home who had bailiffs at the door repossessing their furniture due to the problematic gambling habits of that teacher’s spouse.”

“I do this for the lady I know whose former husband, an economics professor who should have well understood the odds, trashed their marriage with his addiction. I do it for the pastors who tell me of people who come to them so deeply ashamed of the money they’ve wasted and the pain, the debt, the dislocation they’ve caused their family that they are suicidal.”

The Synod motion, carried with acclamation, lamented the enormous losses caused by poker machines and called for NSW Parliament to reform by imposing $1 bet limits on all poker machines, a cashless gaming smart card system and a limit on the maximum number of gaming machines in clubs.

The Synod resolution has been given to the Government, along with an open letter from Canon Grant and Mr Cameron.

In the letter, the ministers say: “As pastors, we can’t remain silent as we hear from people experiencing gambling addiction, who are at risk of physical self-harm, family members impacted by gambling harm facing repossession of a car or furniture, or even children going hungry”.

They have invited the Premier and Opposition Leader to meet with them to discuss the bipartisan reform of poker machines and harm minimisation.