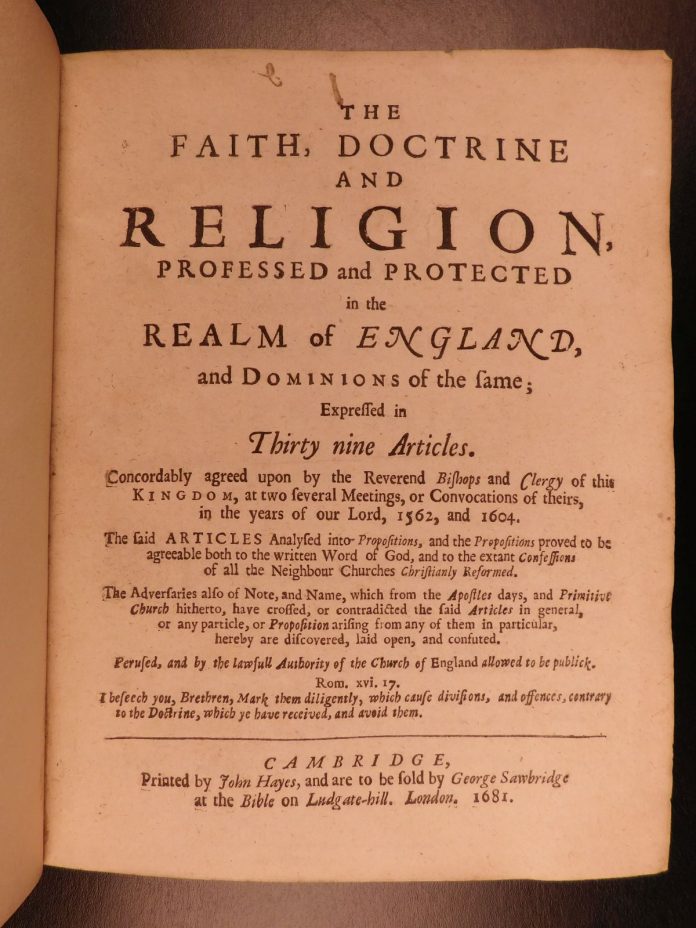 A new visitor to our parish recently told me, “I read your Thirty-nine Articles, and I was underwhelmed. It just seems like a basic Christian statement of faith.”

The Anglican Church’s Thirty-nine Articles of Religion aren’t comprehensive. They don’t answer every theological or ecclesiastical question a follower of Jesus might have. But there’s an elegance in the Articles’ brevity and simplicity that both roots us in the historic church and is timely today.

The Thirty-nine Articles were originally composed as 42 articles by the English reformer Thomas Cranmer in 1553 to unify the Church of England doctrinally. In Cranmer’s own words, the Articles were composed “for the avoiding of controversies in opinions.” After multiple revisions, they reached their final form in 1571, and together with the Book of Common Prayer, the Ordinal, and the Two Books of Homilies, they serve as the formularies of the global Anglican Communion.

The Articles can be categorized into three distinct sections. The first eight articles are the Catholic Articles. They generally represent what most Christians have believed throughout church history. These articles speak to Trinitarian theology, Christology, the holy Scriptures, and the historic creeds. The Reformed Articles (9–33) form the largest section. They reflect the great theological controversies of the 16th century, covering soteriology (9–18), ecclesiology (19–22), missiology (23–24), and sacramentology (25–33). The remaining Local Articles (34–39) deal with local traditions and provisions of the Church of England and how Christians should relate to their local neighbors and governments. To learn more, see J. I. Packer’s The Thirty-nine Articles: Their Place and Use Today and Gerald Bray’s longer treatise, The Faith We Confess: An Exposition of the Thirty-nine Articles.

Weighty but Not Infallible

Packer helps us understand the nature of the authority of historic confessions like the Thirty-nine Articles:

[They] come to us as . . . time-honoured judgements, on specific issues relating to the faith of Christ, as set forth in the Scriptures. They come to us as corporate decisions first made by the Church centuries ago, and now confirmed and commended to us by the corroborative testimony of all later generations that have accepted them, down to our time. . . . It is a prime obligation for Anglicans to take full account of the expository formulations to which our Church has bound itself; and to ignore them, as if we were certain that the Spirit of God had no hand in them, is no more warrantable than to treat them as divinely inspired and infallible.

Confessions like the Thirty-nine Articles are to be neither dismissed nor deified. We shouldn’t view our own doctrinal confessions as infallible, but followers of Jesus who worship in parishes within the Anglican Communion are to give the Articles appropriate weight. They’ve stood the test of time, and we shouldn’t arrogantly think of ourselves as wiser than our forebears.

Each of the articles bears within itself timeless truth for following Christ, but I want to highlight two ways in which the historic doctrines found here are particularly timely today.

First, the Articles of Religion provide an essential anchor for the church by embodying what Lesslie Newbigin described as “the scandal of particularity.” Modern people are often outraged at the idea that Jesus is not one of many paths to God but is the singular, exclusive way of salvation. We live and minister in a therapeutic age that not only rejects the singular claim of sola fide, solus Christus but also rejects the need for any kind of salvation at all. But articles 6 (“Of the Sufficiency of the Holy Scripture for Salvation”) and 18 (“Of Obtaining Eternal Salvation Only by the Name of Jesus”) affirm this scandalous doctrine clearly. At first blush, this may seem awkwardly out of touch with our cultural moment, but the truth of Christ’s exclusivity is what roots the church and allows our ministry to go deeper than felt needs.

Second, the Articles of Religion provide comfort for those who have been hurt by the church. Article 26 is titled “Of the Unworthiness of the Ministers, Which Hinders Not the Effect of the Sacraments.” It’s worth reading in its entirety:

Read it all in The Gospel Coalition