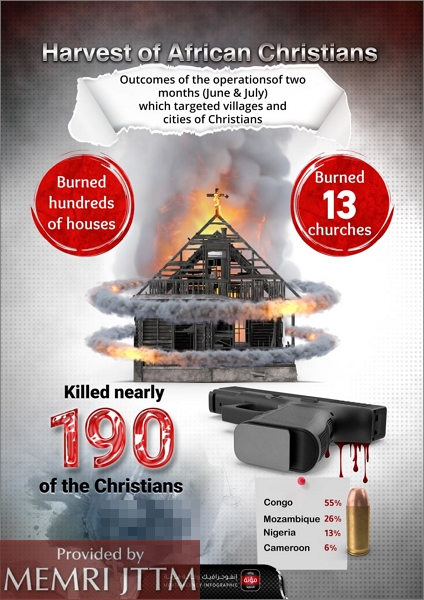 On August 8, 2022, the pro-Islamic State (ISIS) Moata News Agency released a poster in English and Arabic versions titled “Harvest of African Christians,” summarizing the “outcomes of the operations of two months (June & July) which targeted villages and cities of Christians” in Africa.[1] The poster depicts a burning church, a handgun dripping blood, and a graphic image of a dead man wearing a cross around his neck.

A major component of ISIS’ strategy in Africa, particularly in the DRC, Mozambique, and Nigeria, has been targeting Christian civilians to provoke them into fleeing the areas where the jihadi organization operates.[2] ISIS has also targeted Christian noncombatants in other countries, such as Libya and the Philippines.[3]

In recent months, three of ISIS’ four active provinces in Africa – ISCAP, ISWAP, and ISMP, but not the Islamic State Sahel Province, where few Christians live – have escalated attacks on Christians, entering Christian-majority villages, setting fire to homes and churches, and killing locals by beheading or shooting.[4] A video released  in June 2022 by the Islamic State Syria Province threatened Christians, particularly in Africa, that if they did not “repent” they would be killed, along with their wives and children.[5]