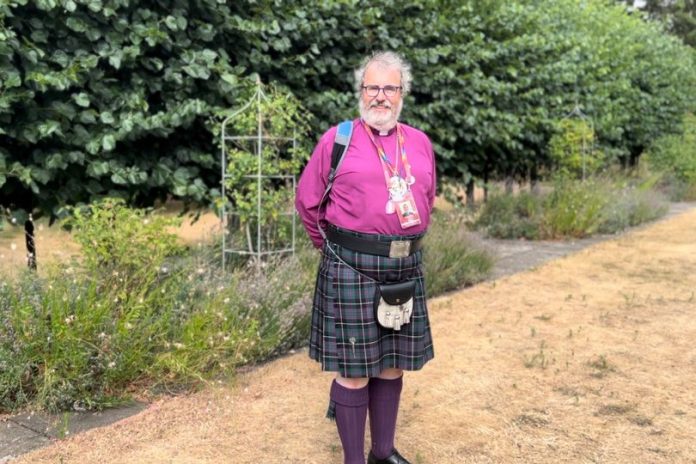 I have written and spoken about the events of Tuesday and the Call on Human Dignity in other places but it is important for me to record the days as this is, after all, a diary.

On Tuesday there was an atmosphere on the campus. I suspect many didn’t notice it but it felt to me like the quiet before a thunder storm. The arguments and statements from the Global South Fellowship of Anglicans had been at the forefront of many minds, we had tried to keep a lid on those who wanted to shout back, and the press had already made up their minds: “there will be trouble ahead”. I kept on repeating our Scottish Episcopal position that you can have a church where different understandings of marriage exist together. I spoke to many of our own journey.

In our bible studies we looked at 1Peter 2; 13 -3; 22. Here Peter calls Christ’s followers to unity, compassion, sympathy, mutual love, and reconciliation. Contrary to the feeling outside the conference venue, the atmosphere in that small group was great. In my group we touched on all the issues in the Calls and we discussed it all without anger or judgment, recognising the humanity of those involved. The Call for Reconciliation began the afternoon session which was constructive and collegiate. Then the Call for Human Dignity process began. Archbishop Justin spoke clearly and powerfully. He told us what he believed: that there is a traditional understanding of marriage as understood theologically and biblically by much of the Communion but that others through theological study and careful exegesis believe that the sacrament of marriage should be available to all who are called into that kind of relationship. As he confirmed that there would be no sanctions and no exclusions I realised I was weeping: we were fully home as part of the Communion. Once everyone had spoken in their groups we were asked to stand in affirmation of the Call. I watched as those who had most disagreed with us stood shoulder to shoulder with alongside us and we all bore witness to the unity of the Communion in its diversity. I will never forget this moment.

I have to confess that I enjoyed a couple of drams that evening following a wonderful speech by Mary McAleese, the former president of Eire, at a fringe event I chaired. She was as brilliant as ever and was a great finale to a remarkable day.

On Wednesday we all decamped from Canterbury to Lambeth Palace. This was a kilt day and how I was happy we had a breeze to keep cool. We arrived in London and many of us went and spoke to a group of protester from Christian Climate Action who were campaigning for the environment, they had a long hot day ahead of them. We walked through the Gateway, across the entrance lawns, taking notice, as always of the magnificent fig tree in the courtyard, and headed round to the gardens. Here we had a chance for fellowship, met more old friends and discovered new ones. The sense of unity felt on Tuesday afternoon continued, everyone wanting to talk to everyone. Do not let anyone tell you that we were falling apart: we were falling back together in great joy.

Lunch was remarkable, all of us in one elongated marquee. During lunch we listened to and engaged with the Call on the Environment and afterwards, as we stood in the shade, hiding from an intense sun, we watched as a new tree was planted and we all then went and added our cups of earth to the tree. In contrast, the lawn at Lambeth was burnt brown by weeks of intense sun and intermittent rainfall, leaves were falling from the trees and it was obvious that climate change is all around us.

I felt a bit like a Tudor prelate as we left Lambeth by boat, sailing down the Thames to Greenwich, the views were great, although standing upright was not easy after a long day, and following the return trip back to Lambeth I retreated to our room and promptly fell fast asleep.