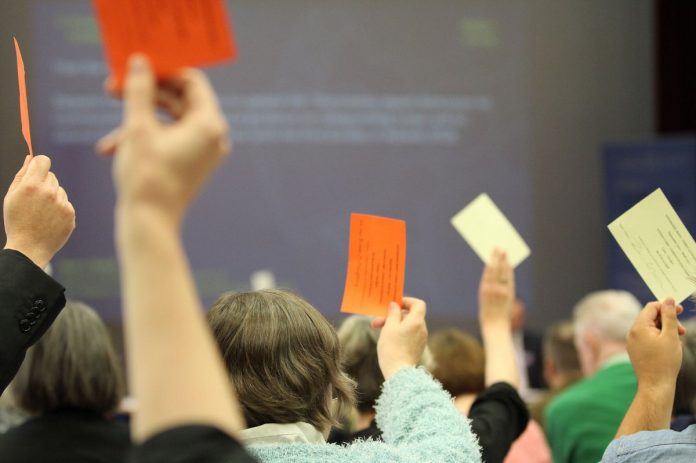 In the latest Lambeth Conference farce, the voting machines, which you might remember, were not for votes, but instead enabled bishops to “choose” or “affirm” the Lambeth Calls, have today been put in a cupboard.

The 650 bishops will now be “voice voting”. Presumably it had a better ring to it than “voice-choicing” or “voice affirming”. Whatever, it’s good to know that everyone is actually voting again, even if the form of ballot would shame a Trade Unionist of 50 years ago: not even a show of hands in the car park.

Apparently, silence will be taken as “Yes”, but there will be a chance for a verbal “No”.

Even in parliaments, members get an “Aye” or “No”. It is a truly bizarre form of voting when silence is taken as, to quote Justin Welby, “a verbal indication of agreement.”

Given that there were three options when exercising a “non”-vote on a Call, it might have been wondered if in future two silences would amount to a deafening one? Or, how the relative silences would be compared for each option? Well, that problem has been solved by the neat expedient of simply getting rid of option three – and instead asking a new question, “in general“, do the bishops agree, “that the direction of travel for the Call [is] the right one?“

Which assuming they can determine the direction the Call will take after it has been amended by the feedback from 650 people, solves, however clumsily, one of the issues that immediately arises.

But there are other questions:

If a single “No” is louder than the silence, does that defeat the Call? Or, is it only if there are sufficient “Nos”, but surely that would require a vote by headcount, not voice? If some “Nos” are loud and some quiet, do they carry equal weight or are some closer to silence than others? Simply how many “Nos”, or how loud do they have to be, to out vote silence? Does a bit of quiet chuntering count?

How is an abstention different to approval? How does one abstain – a noisy silence? An inaudible “No”? It would seem that absenting oneself is to be deemed to be agreement, but no reason is given why. It seems laughable to create a system where if everyone walked out in angry protest, that is treated as assent.

So, let our “Yes” be silent and our “No” be “No” …. but, there are many, many languages spoken at the Lambeth Conference and far more dialects… so:

“No” in English is “La” in Swahili and “Tidak” in Malay. Is it only a “No” in English that counts (which seems rather post-colonial) or how good are the ‘audio tellers’ at languages? When Polish people agree they nod their head and say, “No”. Would that count? Good luck to Irish and Scottish Gaelic speakers, they don’t have a word for “No”. The Thai delegates will have to say, “Not yes” because they don’t use a word for “No” either, as to say a flat “No” is ungracious. For them, “Not yes” is a form of regret that agreement is not possible. Chileans tend to use silence instead of “No”, but at the Lambeth Conference silence means “Yes”. China, Egypt, and much of the Middle East, Kenya, India, Japan and many other places (in other words much of the non-Western world) have a similar aversion to saying, “No”.

And what if, as would be hoped, the bishops are sufficiently diverse that some of them use sign language? How do they vote? Is silent signing affirmation? How loud is a signed “No”?

Is it also fair to ask if harmony is best served by delegates shouting “No” into the silence of those with whom they disagree?