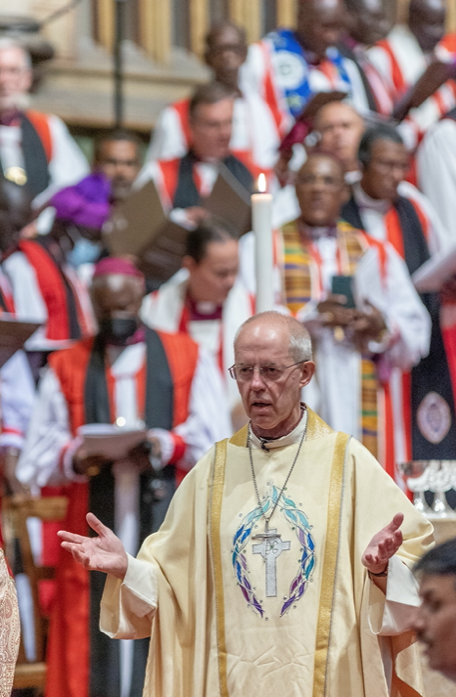 News Analysis: The Global South Fellowship of Anglicans will present their call to reaffirm 1998 Lambeth Resolution 1.10 on Tuesday at 2:00 pm at the 2022 Lambeth Conference. The presentation will take place a half hour before the start of the plenary on Human Dignity.

The GFSA push to reaffirm Lamberth suggests they were unable to reach agreement with the Archbishop of Canterbury on their demands for orthodoxy and transparency from the conference.

On 1 August 2022, the Most Rev. Justin Badi Arama, Archbishop of Juba and Primate of South Sudan released a statement saying:

“In fulfilment of one of its four stated priorities for the Lambeth Conference, tomorrow (AUG 2), the Global South Fellowship of Anglican Churches (GSFA) shall offer bishops an opportunity to re-affirm Lambeth 1.10 as the Anglican Communion’s official teaching on marriage and sexuality.

“From 2pm, the Text of the Call shall be made available from the EFAC Stand in the Resource Centre, at various entrances on the Campus, via email to over 250 orthodox bishops signed up to receive GSFA notifications, and on www.lambeth22resourcegroup.com. A covering note to the text shall explain how bishops can anonymously reaffirm, and in a secure manner.”

The GFSA call to re-affirm Lambeth 1.10 has been several months in the making, sources tell Anglican.Ink.

Sources in the call process have confirmed the Rt. Rev. Kevin Robertson’s claim the committee tasked with preparing the Human Dignity call did not ask for a reaffirmation of Lambeth 1.10. Speculation as to where the call to reaffirm came from, among informed sources, is the vote to reaffirm was added shortly before the conference and styled a preamble, and not part of the call itself.  The rationale behind this action would be that affirming a call would not affirm the preamble, which was an explanatory item. The presence of the preamble, however, was expected to mollify the GFSA who would likely misconstrue the distinction between preamble and call. AI has not been able to confirm this theory, however.

If this were the strategy, it backfired, infuriating activists when the Calls were published on 22 July 2022. The uproar compelled the Rt. Rev. Tim Thornton, former Bishop at Lambeth and an aide to Archbishop Welby, to meet with protestors, leading to the revised call that now omitted the reaffirmation of Lambeth 1.10.

On 29 July 2022  Bishop Thornton told a press conference he took full responsibility for the poor communications and hurt the preamble had caused, but declined to say how the situation arose.

The GFSA primates were mildly pleased to see the call to reaffirm in the original call, but were planning nonetheless to bring the issue before the conference on an up or down, roll call vote.

Last week they requested a meeting with Archbishop Welby to present their requests, which included: A five minute break in the Anglican Identity plenary (Monday) to ask the conference to affirm Lambeth 1.10. This vote would be done independently of the conference voting system; A list of all bishops present; Voting records; and Separate worship space for those who could not take communion with those who had broken Lambeth 1.10.

Archbishop Welby offered to write a letter stating Lambeth 1.10 was the official position of the Communion, in lieu of an up or down vote.  Alternate worship space for the second Sunday Eucharist was also discussed, but further time was needed to bring the parties together.  On Sunday Archbishop Welby changed the voting process, removing individual votes with a voice vote.  Talks resumed and a draft letter was offered to the primates. The contents of this letter have not yet been made public.

On 1 Aug 2022 the Lambeth Palace press office released a statement confirming the GFSA primates had met with Archbishop Welby.  They did call into question press accounts of the meeting writing: “We won’t be commenting on speculation from unnamed sources not present at the meeting, other than to say that these should not be seen as reliable accounts of a conversation between primates conducted in the spirit of prayerful dialogue.”

Given today’s announcement from the GFSA it is likely they have rejected Archbishop Welby’s letter.

In a July 9 video Archbishop Badi Arama presented the four priorities of the GFSA at Lambeth 2020. Archbishop Wong restated them in a 29 July 2022 press conference saying: “Our four-fold objectives of GSFA bishops attending Lambeth are: the unity of the orthodox, biblical faithfulness, including the re-affirmation of Lambeth 1.10; a non-separatist, but a holy remnant; and a commitment to world mission.”

Today’s press statement noted: “As a matter of courtesy, a copy of the text shall be given to the Archbishop of Canterbury tonight.”

It further stated the “details of the text, and how bishops shall reaffirm, will be circulated tomorrow, at 2pm.”

The conference continues until Sunday.