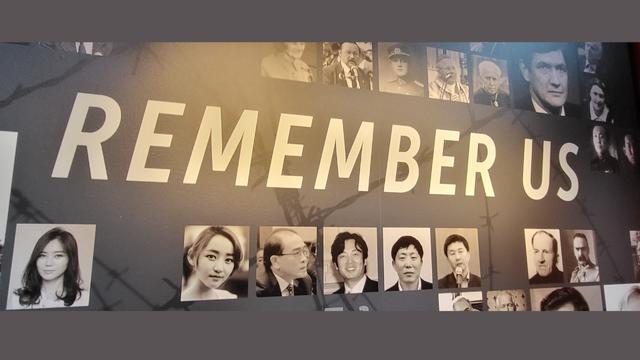 Tt is important that scholars debate statistics and criteria, but one thing is beyond doubt: Communism is the deadliest human-made catastrophe in all history, and the Chinese Communis Party alone killed more human beings than anybody else. Around 1,5 billion still suffer under Communist rule. Harsh Communist persecution continues in several countries, including one sitting among the five members of the United Nations Security Council, China. It is common, and not illegal, to see Communist parties in democratic Parliaments and Communist symbols displayed with no shame, while of course a similar promotion of Nazi ideology is forbidden and unthinkable, and rightly so.

The casualty counter of the introductory video in the first room fires staggering figures. “Revolution,” “war,” “persecution,” “genocide:” these key words guide the visitors’ steps along the floor. Red, as blood, predominates over every other color in panels, captions, and photos. Finally, in the last room, a supplication takes the place of accusations. “Remember us,” photographs hanging on the walls say. Mostly are heroes and victims who passed away, some are living testimonials. Among them I recognizes friends of Bitter Winter such as Rushan Abbas, president of Campaign for Uyghurs in Washington, D.C., and Dolkun Isa, president of the World Uyghur Congress in Munich, Germany.

The museum has a tremendous merit. It is not an exhibition of relics from ancient times, nor a deposit of invectives. It is a true and distressing film, evoking the past so that, as Russian writer and dissident Aleksandr I. Solženicyn (1918-2008) used to say, memory can live on. But above all, it underlines Communism’s resilience. Many say it, many repeat it, but all are wrong: Communism did not disappear into thin air. It evolved and adapted to times, refining its persecution methods and becoming even more clever. The Museum’s rooms dedicated to China, Indochina, and North Korea effectively display this forgotten truth.

Another strength of the Museum is what it does not do. The Museum does not tell the fairy-tale of a “good idea badly implemented,” and does not support the lie of a supposed “good Lenin” vs. a “bad Stalin” —as if only “Stalinism” was “bad” in all Communist bloody history. Instead, it reminds visitors that Leninist Russia became a repressive, oppressive, and totalitarian state quickly. It was Lenin who devised the monstrous Gulag system, a system by no means accidental but essential to Marxism-Leninism, and always implemented in every possible cynical variant wherever Communism is in power.

It is difficult not to be moved by so many stories and images. After the visit, one could sum Communism up by saying it is a monstrous violation of human rights and dignity conducted on an industrial scale. The anti-religious dimension of Communist worldwide persecution appears in every corner and every story told in the Museum, intertwined with the other aspects of Communist rule since its beginning. In fact, Marxism-Leninism always considered religion an alienation of the human spirit and its persistence as public enemy no. 1. It tried to eradicate religious and spiritual sentiments, either immediately or, when practical conditions were not favorable, through a gradual process.

Of course, every visitor of the Museum would leave it with different personal impressions. Few would forget the eyes of persecuted Hungarian archbishop József Mindszenty (1892–1975), whose noble resistance to red totalitarianism became the conscience of a nation. Or Polish Cavalry captain Witold Pilecki (1901–1948), who voluntarily entered Auschwitz to document Nazi atrocities, later did the same with Soviet crimes, and ended up being killed by Soviet Communists for this “trespass.” Or the true tale of the “Miracle on the Vistula,” the river crossing Warsaw where, in 1920, the Soviet Red Army suffered its only military defeat before Afghanistan in the 1980s. Or the patriots of the 1956 anti-Communist rebellion in Budapest.

Visitors will never forget the experience of hearing the live voices of Polish Father Jerzy Popiełuszko (1947–1984), killed by the Communist government of his country, and Pope John Paul II (1920–2005), boldly denouncing the inhumanity of Communism.

Images of the massive Communist genocide of the people of Cambodia will haunt many, and the staggering amount of lies on which the presentation of the “false paradise” of Communist Cuba rested will bewilder all.

Then, visitors will go up to the second floor, saluted, while climbing the stairs, by the “Goddess of Democracy.” This is a symbol the VCMF often uses. Chinese students demonstrating for liberty in Tiananmen Square in June 1989 gathered around a white statue in the shape of a modern “goddess.”. When the CCP’s army crushed them in blood, it destroyed both their lives and the monument they had erected to democracy. VOCF collected its legacy. One replica is in the Museum, another can be admired near Union Station in Washington D.C. It was dedicated by President George W. Bush on June 12, 2007, on the 20th anniversary of President Ronald Reagan’s (1911-2004) famous Brandenburg Gate speech calling Soviet ruler Michail S. Gorbačëv to tear down the Berlin Wall of Shame. Visitors can hear that very speech in the Museum.

The second floor is in fact dedicated to the Tiananmen Square massacre, which occurred on June 4, 1989. Documents, some of them original, and relics are displayed. The headbands that students wore, and a tent used by the pacific protesters. One item is particularly touching. It is the shirt worn by Jiang Lin, soaked in her own blood. A former soldier in the People’s Liberation Army, she was documenting the protest for the PLA’s journal when military servicemembers beat her savagely on her head. She survived to testify, some thirty years later, the truth of that horrendous night that the CCP still denies ever took place.

Communism thrived through deception, lies, abuse, and violence since its beginning. I recommend you go to the Museum and dive into this truth very seldom told. The Museum is for everyone, and makes no concessions. And the visit is free of charge.