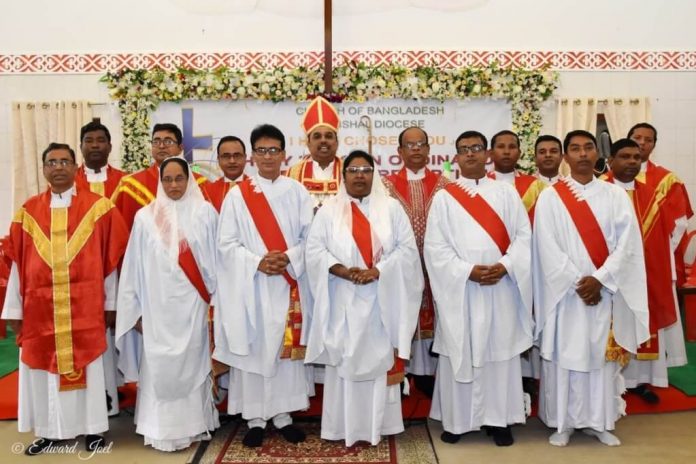 After a fifteen year halt, the Church of Bangladesh has resumed ordaining women clergy. On 12 December 2021 the Diocese of Barishal ordained five deacons, including two women vocational deacons at Christ the King Church, Khalispur, Khulna.

A statement released in May by the Church of Bangladesh stated: “We rejoice with all fellow believers that after 15 years of interval, The Church of Bangladesh has resumed Women’s Ordination. Barishal Diocese has played a prominent role in this.  Being a new diocese, this has ensured inclusiveness in all areas of ministry.  We are thankful to the respectable Moderator of the Church of Bangladesh, the Most. Rev. Samuel S Mankhin, for this historic decision. The first two Women Ministers had their deacon ordination in 1996 at the same church under Dhaka Diocese.”

Sources in Bangladesh tell Anglican.Ink the decision fifteen year gap in ordinations to the diaconate for women arose due to the personal views of the moderator of the church, but remained permissable under the church’s canons. The Church of Bangladesh’’s new moderator has revised the policy in line with his views.