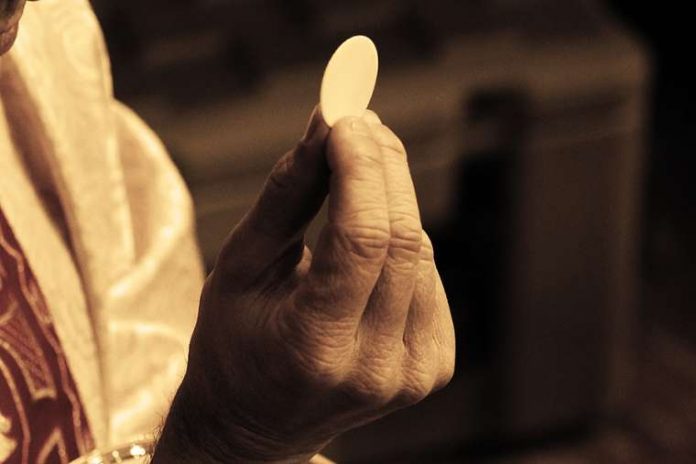 Of the many resolutions to be discussed at this month’s General Convention of The Episcopal Church was a proposal to remove the canonical requirement that holy communion be offered only to those who are baptized. According to Episcopal News Service, the proposal now has no chance of passing because it was not forwarded by a pre-council joint meeting of the committees on prayer book, liturgy, and music. The church should breathe a collective sigh of relief that the idea has been rejected—at least for now.

Inclusivity appears to be the primary concern for those seeking to change the requirement of baptism to receive communion in The Episcopal Church. Inclusivity is a noble and worthy goal. For that reason, we Episcopalians already invite all who would come to the table of Christ to come as well to the baptismal font. Baptism is not a wall that must be climbed on the way to the eucharist, it is a covenant where those who would feed on Christ profess a willingness to grow in his teachings.

Some commentators have mentioned the fact that scripture does not teach a requirement of baptism for communion. In an explicit sense that is correct. But it implicitly supports the deep spiritual connection between the two sacraments. At the Last Supper hosted by our Lord, it was his disciples who were present. Scripture never says they had been baptized at that point, but they clearly had entrusted their lives and well-being into the hands of Christ. The effective, grace-filled sign of that commitment today in the church is baptism.

The connection between baptism and eucharist developed early in the church. One early Christian document entitled The Teaching of the Twelve Apostles to the Nations reminded its readers that holy communion should be reserved only to the baptized. Known also as the Didache, its origins lay in the first or second century, and for some churches of the time the document probably carried the authority of scripture. The important sacramental connection between baptism and eucharist should continue, and multiple theologians have warned against severing this connection. As reported recently by Episcopal News Service, 22 Episcopal theologians have written to ask that this proposal be rejected by General Convention.

The table of God is not just a place for fellowship with one another, not just a place to dine. And it’s not just a table. It is also an altar where we make a “sacrifice of praise and thanksgiving,” as we are reminded by the eucharistic prayers. Christians constitute a priestly people, and priests are called upon to make sacrifice. What is the primary sacrifice of the Christian? It is the giving of our lives to both God in Christ and to others in service. The outward sign of this life-changing commitment is the water of baptism, and this commitment should not be undertaken lightly.

All people, religious and non-religious alike, belong to God. They were created by God and are loved by God. But all people are not Christians. The doors, hearts, and baptismal fonts of our churches are open to all. It is not we Episcopalians who turn others away from baptism, so it must be something else. Is it that they are neither ready nor willing to make a sacrificial covenant with Christ? When taken seriously, this thought should cause us all to pause. This commitment to self-sacrifice is so central to faith that we Episcopalians have the sacramental rite of confirmation, so that those who were baptized as infants may publicly profess (confirm) their willingness to follow Christ in his own sacrifice.

We who are baptized must not look down upon those who are not, for it is only by grace and forgiveness that we have been incorporated into Christ. When we gather at the table that is not only that of God, but also of Christ, we feed spiritually on his body and blood. These sacramental signs put us in touch with the sacrifice he offered for all of humanity, meaning that it was a divine act of inclusivity. To any who would sacrifice of themselves as disciples of Christ, the church says welcome. Welcome to the font, and afterward, welcome to the table that is also an altar on which the sacrifice of your life is given and accepted.

The Rev. Dr. John Switzer is emeritus professor of theology at Spring Hill College in Mobile, AL, and rector of St. Pierre’s Episcopal Church in Gautier, MS. He also serves as editor of The Mississippi Episcopalian.